“From the British coastline to the rooftops of Manhattan, Antony Gormley’s sculptures are recognised across the world. With work from his 45-year career alongside major new installations created for our galleries, we present his most ambitious exhibition in more than ten years.”

Antony Gormley was born in London in 1950 and is an Honorary Fellow of the Royal Institute of British Architects. He is an honorary doctor of Cambridge University and has won the most prestigious visual arts award in Europe: the Turner Prize and the Bernhard Heiliger Sculpture Award, etc. His sculptures, installations and public works of art are widely acclaimed for their exploration of the relationship between body and space. His works critically explore the basic problems of human existence in the natural universe by integrating himself and the participation of others. He constantly tried to make art space a place to generate new behaviours, thoughts and feelings. 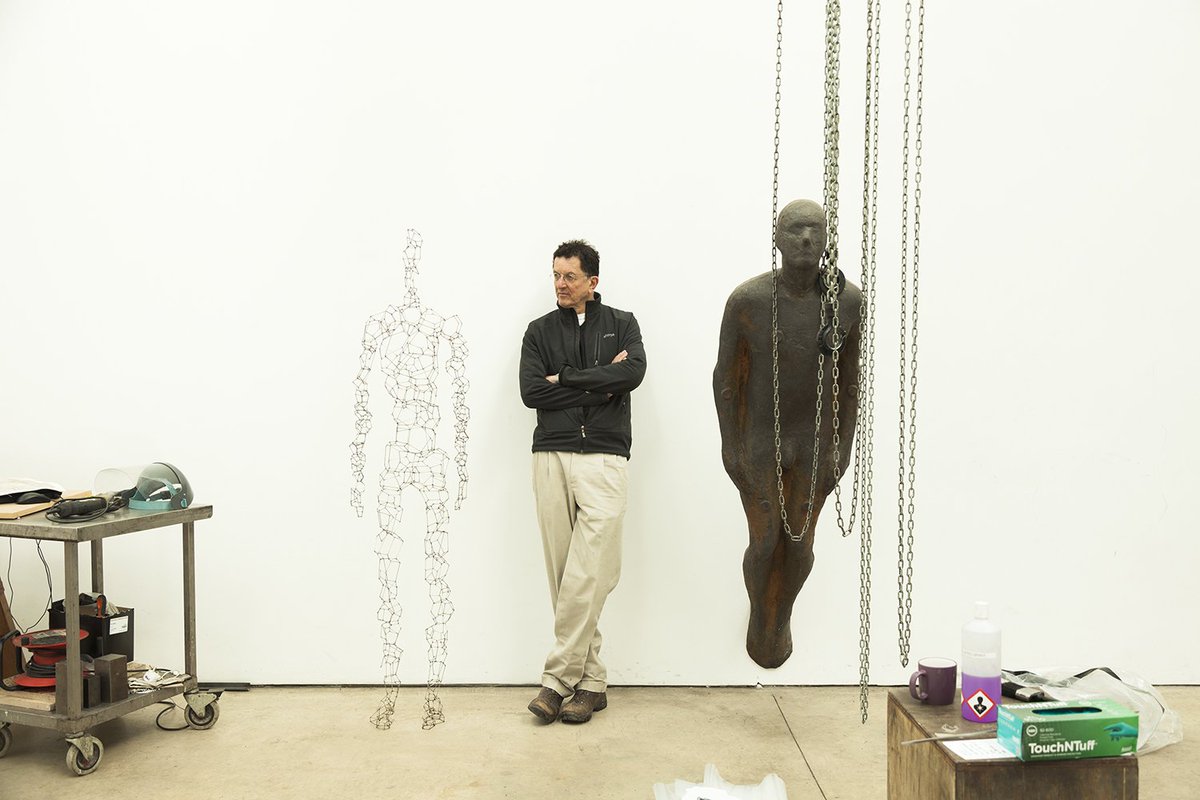 The organic, industrial and elemental materials that Anthony has used extensively over the years, including iron, steel, hand-lead, sea water and clay art will be presented in this exhibition. In addition, the exhibition will introduce Anthony’s little-known early works in the 1970s and 1980s (including pocket sketches and sketches), some of which Anthony used his own body as a creative tool. 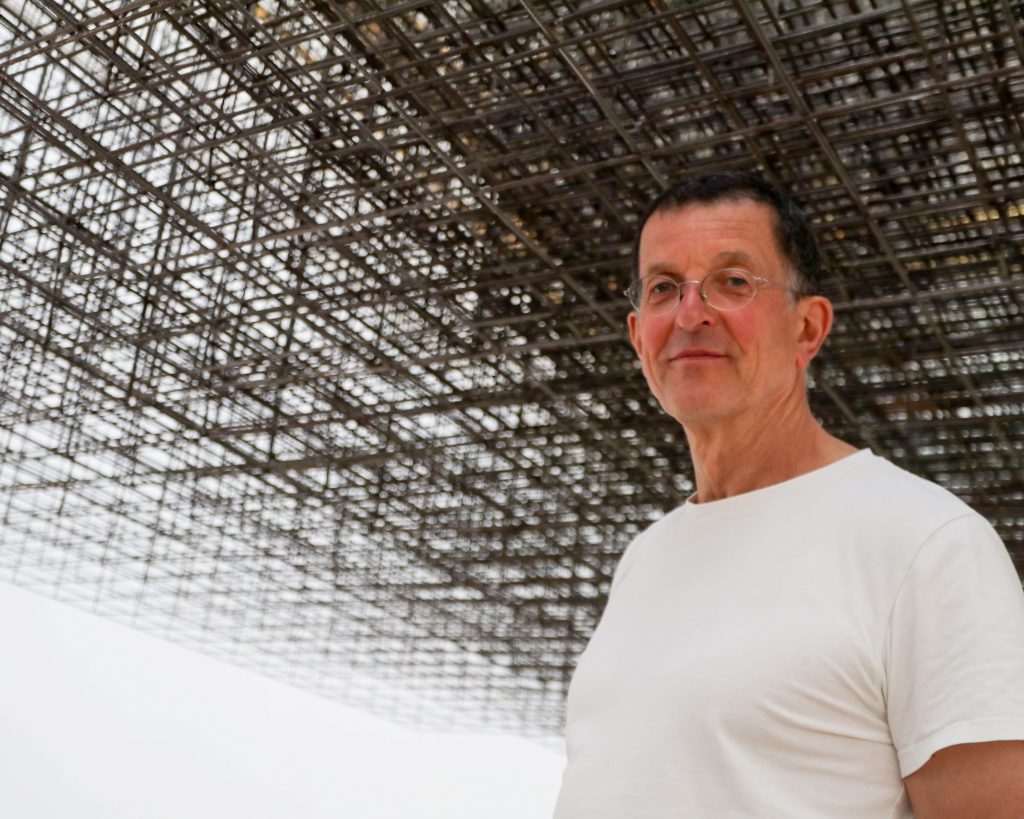 Gormley describes the body as a “place”: a place of experience, emotion, consciousness, memory and imagination. In this exhibition, the artist invites us to rediscover this interior realm, the space we each inhabit, through a series of encounters that heighten our attention to our bodies and our surroundings. 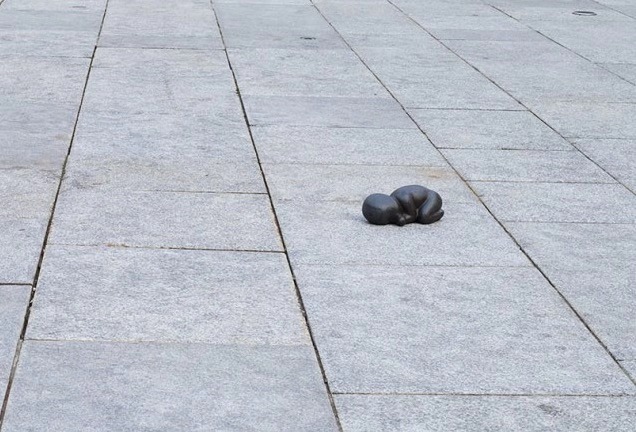 Before entering the exhibition hall, in the courtyard of the Royal College of Art, we can see an iron baby sculpture lying on the ground. This little object was inspired by Antony’s six-day-old baby. We can’t tell if it is a boy or a girl. But what can be determined is that this is not just a portrait, but a space that the body once occupied, a moment of vivid life.

The artist has stated: “its density suggests energy potential like a small bomb. The material is iron (concentrated earth), the same as the core of our planet. Here, this tiny bit of matter in human form attempts to make us aware of our precarious position in relation to our planetary future. It is the gesture of body closed in on itself, needy of comfort, shelter, sustenance and peace”. 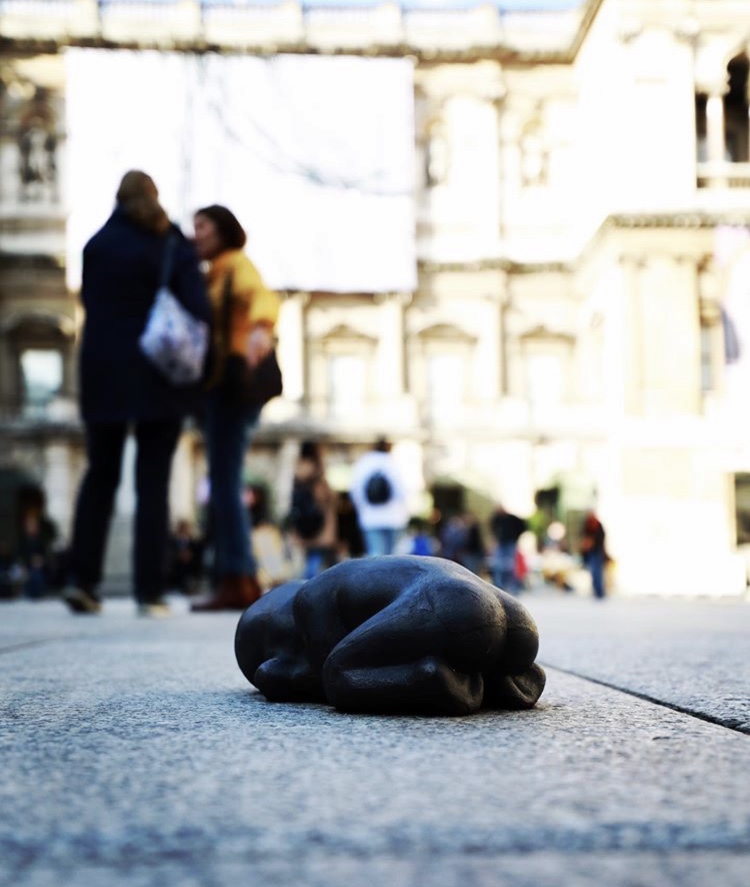 The second floor is the main exhibition area of this special exhibition.

Mother’s Pride III is an important example from Antony Gormley’s ‘bread works’ series, which began in 1979 and continues to the present day. The series is part of the artist’s early and ongoing material examination of the body as a vessel and site of alchemical change. This series is Anthony’s early and concurrent testing of the body as a container and reaction site. It is understood that the creative process of this work is very interesting. One day in 1982, Anthony lay on the floor and asked his wife to paint his body outline with a brush. Then Anthony painted the outline as a contour, roughly the same size as a king-size double bed, and divided it into two same parts. Then, Anthony started a three-and-a-half-month diet plan: he had to eat the same amount/volume of toast as his body. The toast brand he ate was the “mother’s pride” that was well known at the time. In order to form the shape of his body with toast stitching, Anthony used the toast skin to carry out “inlaid art.” Anthony believes that toast is integrated with human life. Every time he bites the toast, the gap would be the “Bread Line”. The “bread line” is for life; for the distance we are moving forward, also for the depth we exploring in the body, and for the measure of a certain moment. 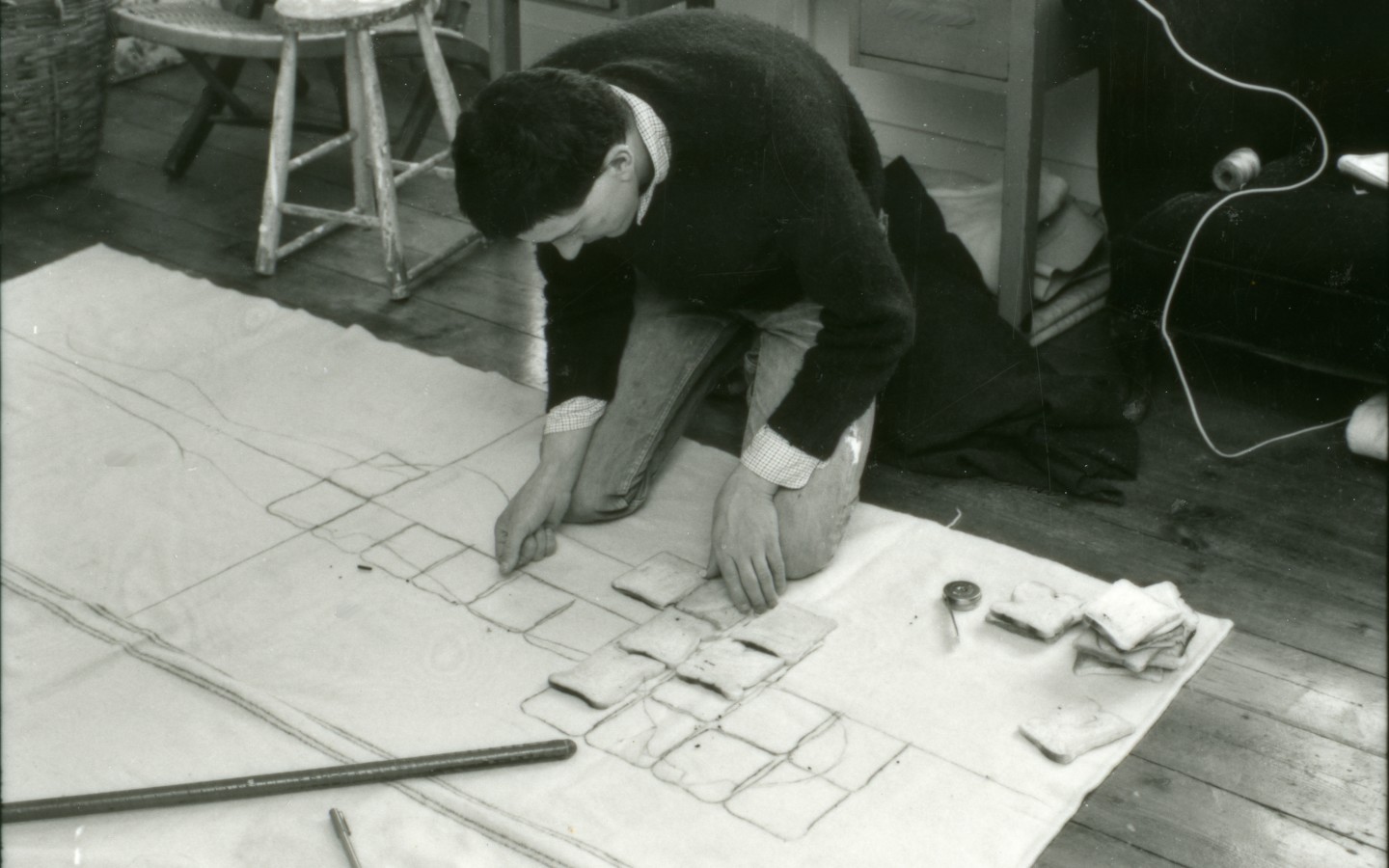 The artist explains: ‘If Michelangelo’s ‘The Dying Slaves’ are an evocation of a neo-platonic idea of the struggle between spirit and matter, if they suggest that the work of a sculptor is achieved through physical prowess and genius, with the ability to impose some spiritual form on inert, intransigent matter, then I thought that the reverse was just as interesting. That somehow, that the thing that we each do at breakfast is a transformation of matter into mind. Eating is an alchemical transformation. I made a number of works using bread; a substance that lies outside for a while then enters the body and then becomes the body.’ 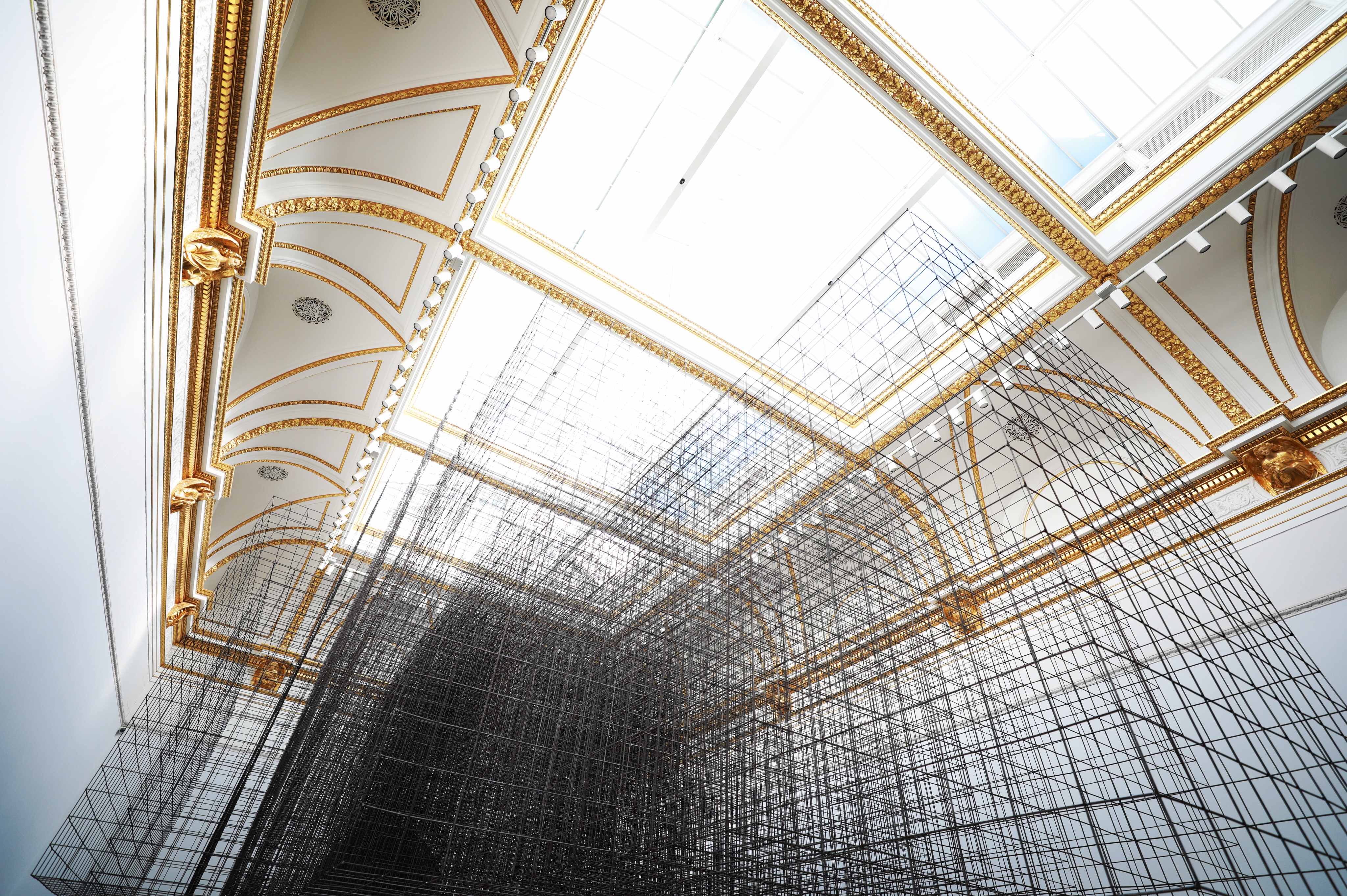 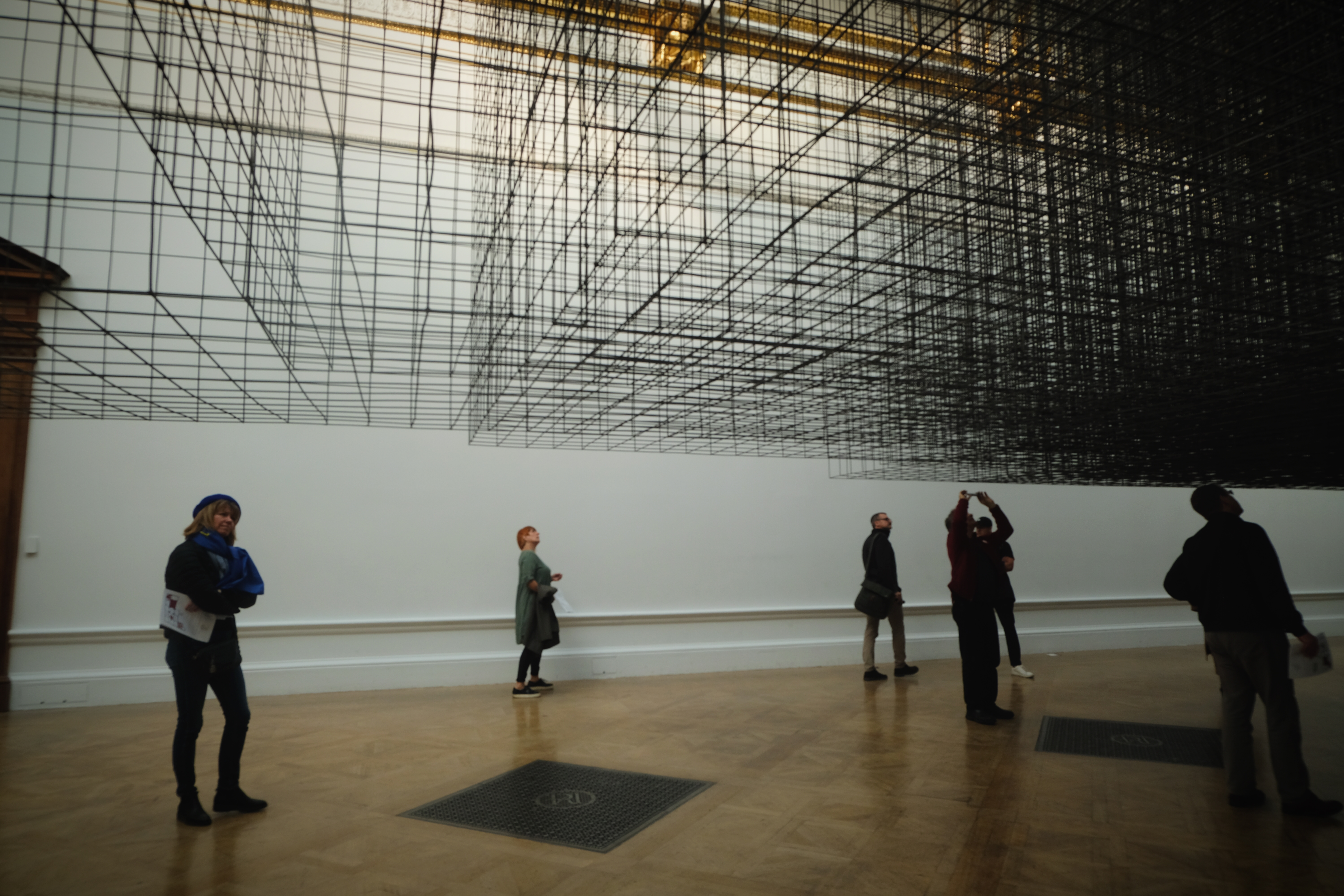 “Matrix III” combines geometry and architecture perfectly. The “small cages” stacked are made of 98% recyclable industrial materials, like the internal skeleton of our living environment. The “huge cage” composed from the “small cages” is set up in a small exhibition hall, and the vacancy in the core of each “small cage” is the “dream space” described by Anthony. Moreover, The sum of its size is equivalent to the average area of new bedrooms in Europe. 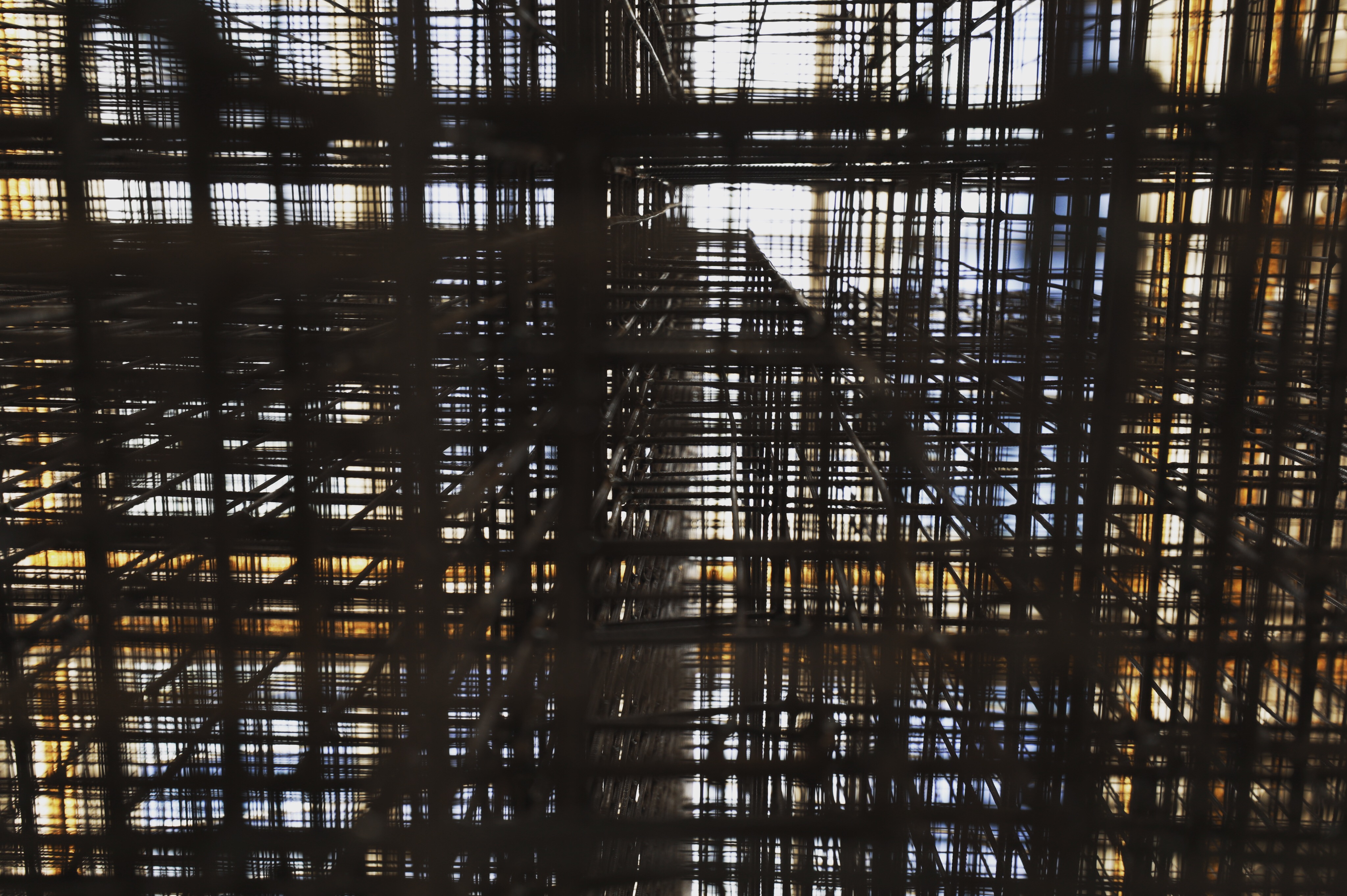 When we look up at this unique work, it is difficult for us to judge the distance and direction with the naked eye – the certainty and firmness of the 3D world is destroyed. Anthony described Matrix 3 as “the ghost that exists in the main habitat we have chosen.”

We are going to live in higher and higher densities.

Anthony used to use his body as a medium and tool to shape himself in plaster and sculpture. In his research, the combination of body and grid is presented in different ways in the life.

In Lost Horizon, human statues are placed at right angles to the floor, walls, and even the ceiling. Like Iron Baby, each sculpture expresses a state of lack of energy and concentration. A human sculpture made of iron is continuously produced from six similarly shaped molds, and each one records a living moment. Anthony said that when we close our eyes, but still have consciousness and feeling, we occupy another space without coordinates. 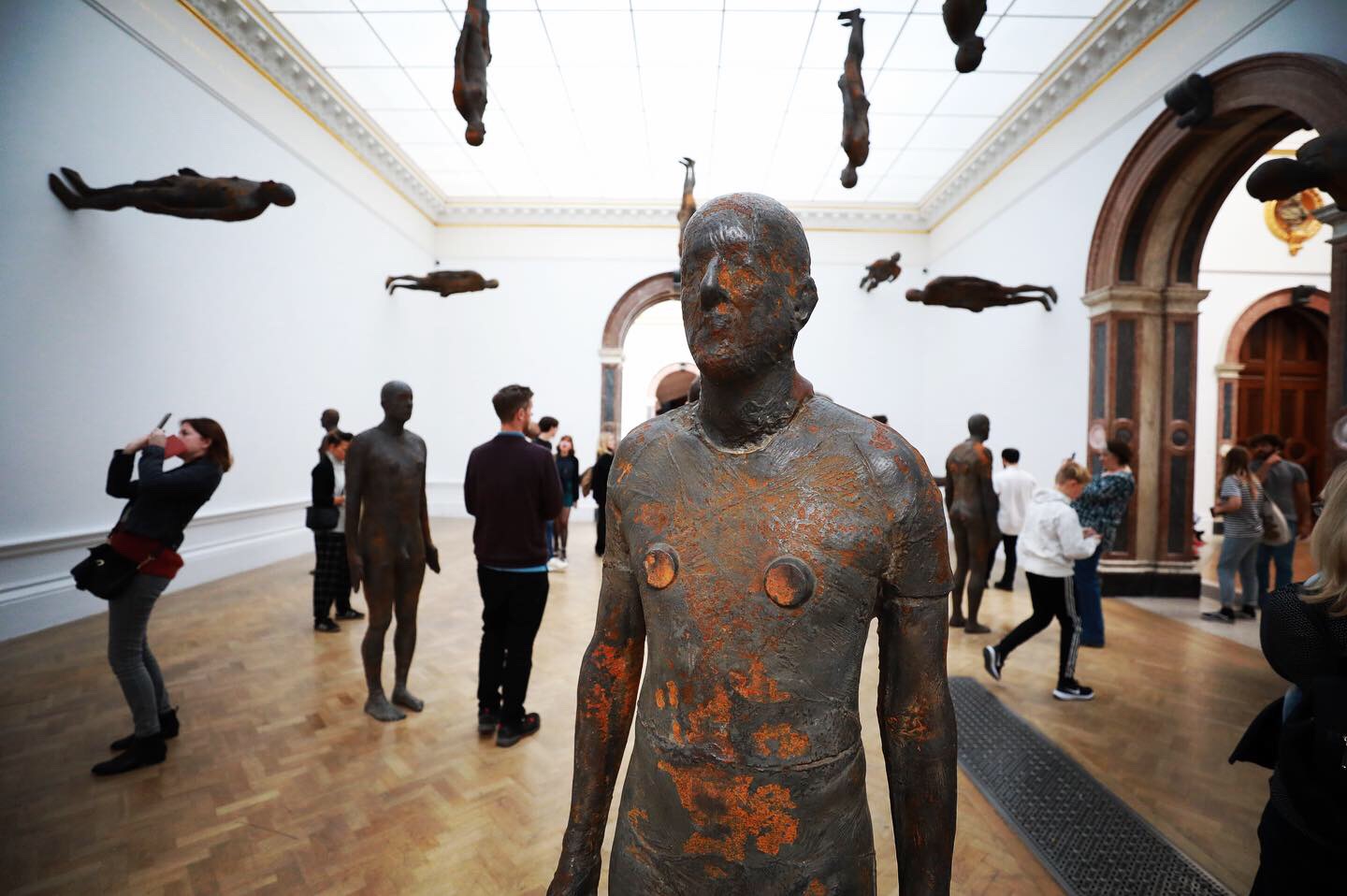 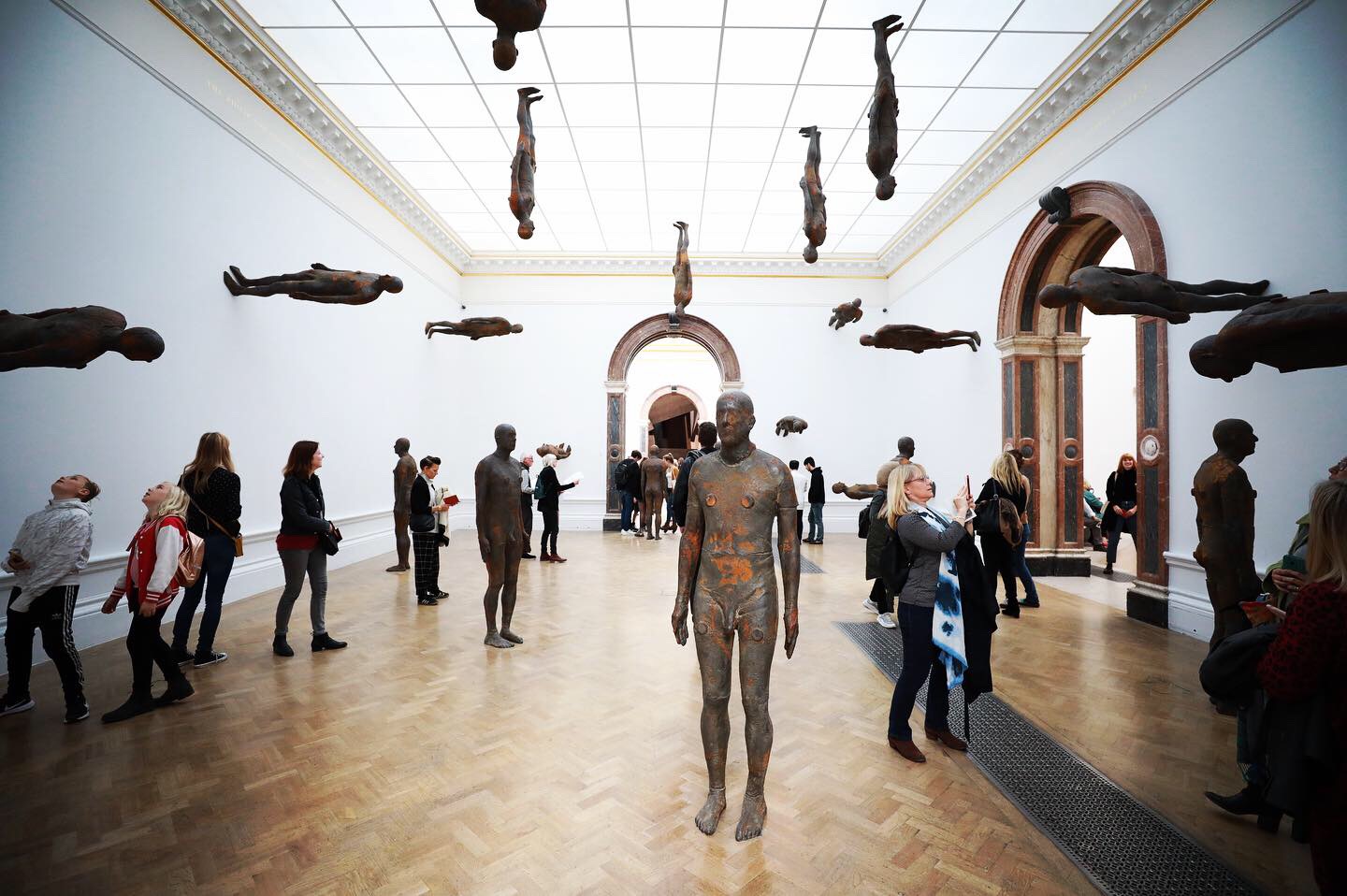 For Anthony, the body is a container for perception. It is a unique place for personal journeys and a tool shared by everyone. 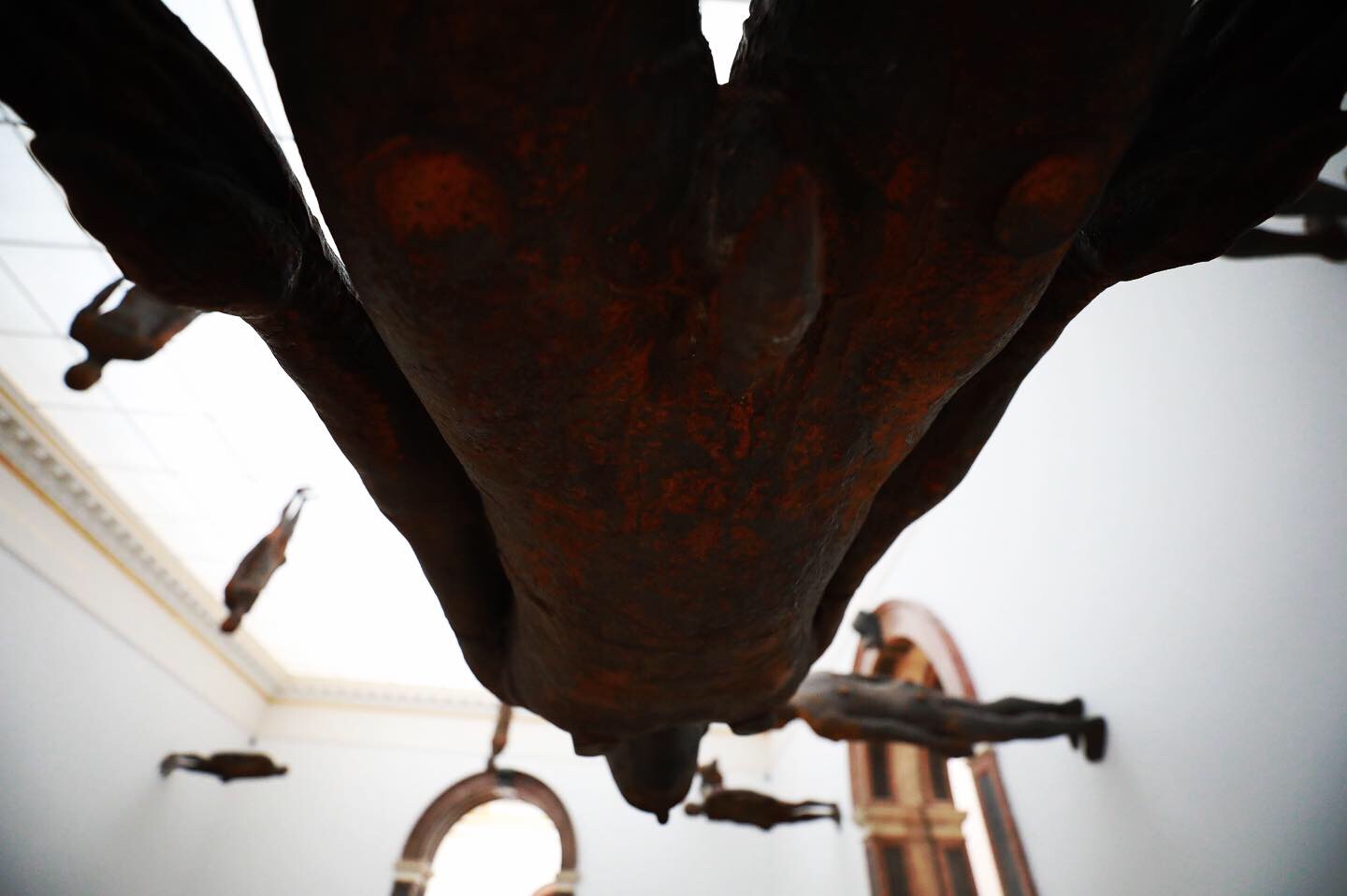