Have you watched the cartoon “Olympus Star”? This is how I know the Trojan War, when I was a young kid doing sixth form. How time flies! (And in case you want to know, “Lore Olympus” is the 2019 version) 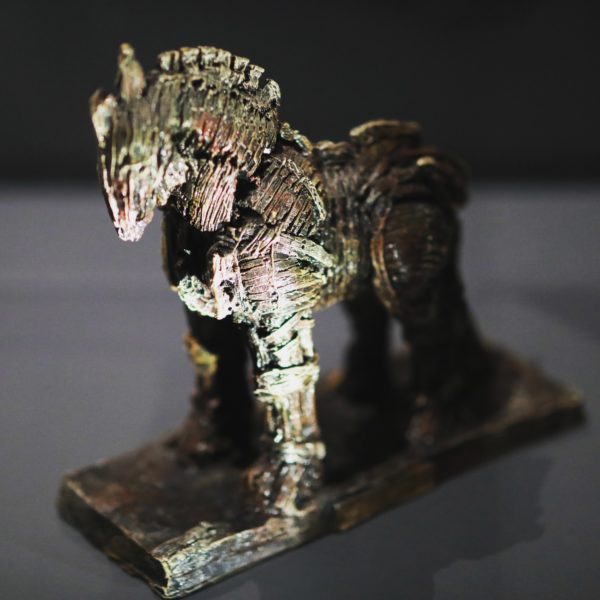 The Trojan War occurred during the Mycenaean civilisation. The Mycenaean civilisation was a relatively developed civilisation in the early world flourished from the 15th century to the 12th century BC. Its heyday was around the 13th century BC. The creator of this civilisation has been confirmed to be ancient Greek. But at that time, they did not have the name “Greek”, they were called Akaya. The Akayas migrated from the Balkans to the middle and south of the ancient Greek peninsula around 1650 BC, where they established the first slave state, the Kingdom of Mycenae. In the 12th century BC, the kingdom of Mycenae clashed with countries in the southwestern coast of Asia Minor in order to compete for maritime supremacy. The Trojan War lasted for 10 years and costed a great deal of strength of Mycenae, making this once glorious country into weakness and disasters. One war had torn down a civilisation, which is why this war has attracted much attention. 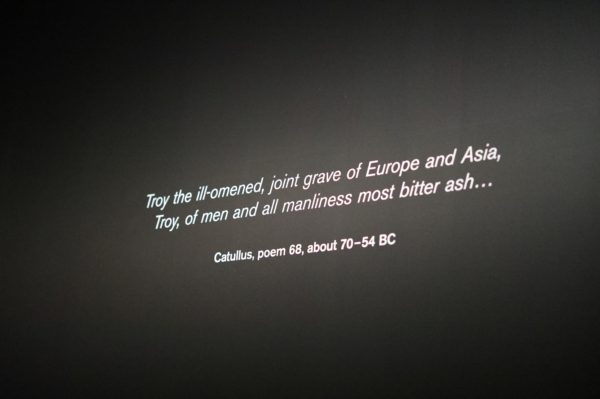 The “Trojan horse” was described in the epic poem “Iliad” by the ancient Greek poet Homer in the 9th century BC. Prince Troy Paris came to the palace of King Sparta of Greece and received a warm hospitality from Menilaus. In return, Paris abducted Menilaus’ wife. Menilaus and his brother were so angry that they swore to slay Troy. The war hanged for 10 years until hero Odysseus offered a plan. Mycenaeans were asked to burn down their camps and board the warships to retreat, only leaving a huge wooden horse behind. The Trojans dragged the horse into the city but were stupid enough not to check it thoroughly. When the Trojans chanted and celebrated the victory that night, the Mycenaean soldiers hidden inside the horse sneaked out, opened the city gates for the Greek army ambushed outside the city. Then we all know what’s happened. 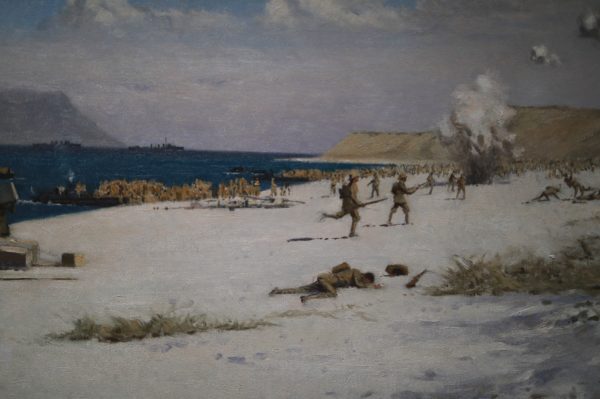 “Troy: Myth and Reality” by the British Museum is the exhibition that we are led back to three thousand years ago in Troy to feel the rise and fall of a legendary kingdom. 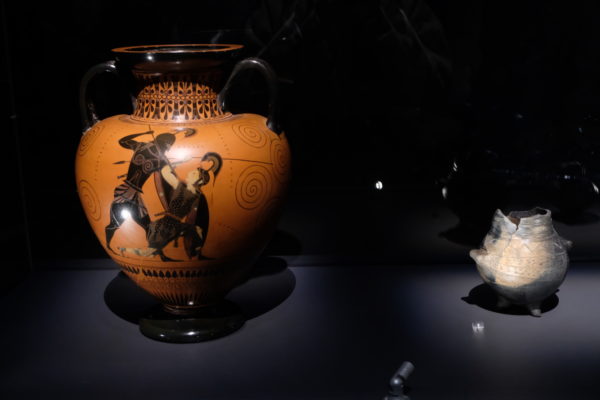 British artist Anthony Caro’s installation of 40 sculptures recreated the Trojan battlefield on the epic scale. From wood, salvaged steel and rugged chunks of clay emerge gods, heroes and the Scaean Gate, the main gate in Troy’s walls. Caro commented: “my Trojan War…is more to do with the sort of brutality we’ve seen in Bosnia than with the Greek and Trojan heroes we’re meant to admire. It’s about fighting and it’s about being human.” 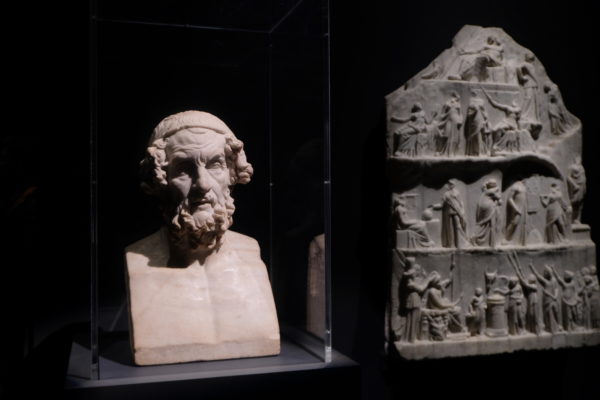 The left is the portrait of Homer and the right is the sculpture of Anthony Caro.

Wall paintings in Roman villas often depicted Trojan stories. This one shows below from Pompeii describes an episode in Virgil’s Aeneid. During a battle with the Italian king Turnus, an arrow has struck Aeneas in the thigh. The healer Lapyx tries to remove the arrowhead. Aeneas’ weeping son Ascanius supports him, while his mother Venus (the Roman equivalent of the Greek goddess Aphrodite) secretly intervenes with divine remedies. 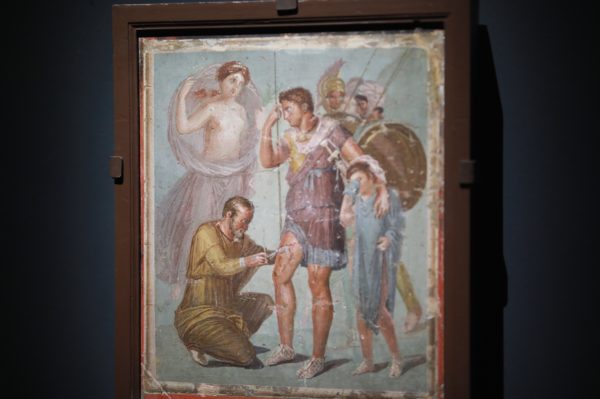 Roman sarcophagi were often decorated with scenes from Achilles’ life. He embodied beauty and strength, and his story showed the fragility of a hero’s existence, fitting for the funerary context. 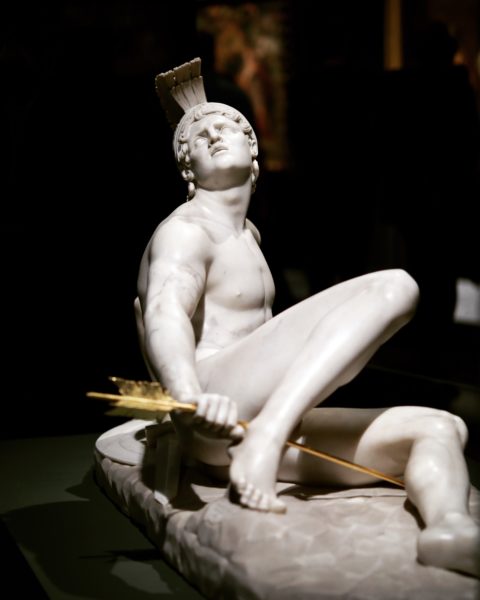 Filippo Albacini (1777-1858), ‘The Wounded Achilles’. Marble, 1825. This sculpture depicts the dying hero Achilles with an arrow piercing his heel, his only vulnerable spot.

This special exhibition brings not only the vivid historical moments of the Trojan War in the first part, but also new thoughts and works inspired by the war in the second part. A huge skeleton of the horse floats above all, people below cannot stop wondering how it is like living in the era that gods and human beings co-exist and fight. Myth continues. 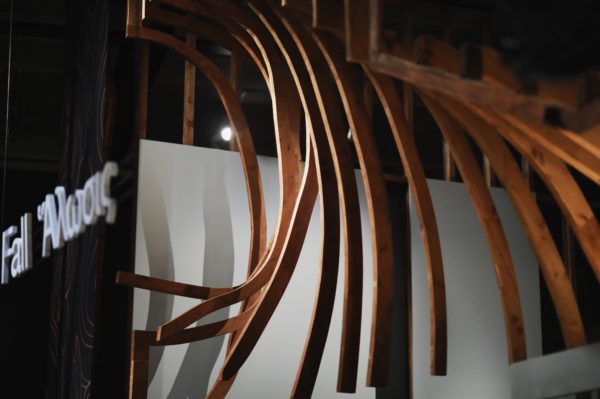 In the end, definitely not miss this Achilles’ shield. In Homer’s Iliad, the god Hephaestus makes Achilles a new shield of gold, silver, bronze and tin. No carbon fibre unfortunately. On the shield, he crafts the whole earth, the skies and a city – very likely Troy – in peacetime and at war. And, voila this is the shield. For more pictures of the exhibition, please visit our Instagram @JUZIARTS 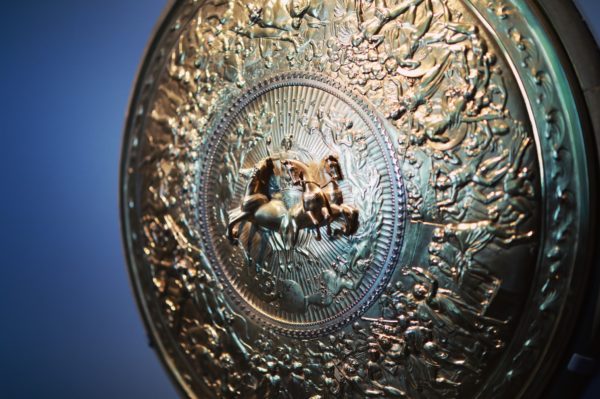