This is a self-portrait of photographer Nan Goldin.

The work is called “Nan, who was beaten after a month”. I was surprised when I saw this photo for the first time. Although Goldin in the photo reveals awkwardness and the bruises on her face are clearly visible, her eyes are firm, calm, but helpless. This is completely different from the self-portraits I have seen before.

Why did Goldin shoot a photo of herself like that? 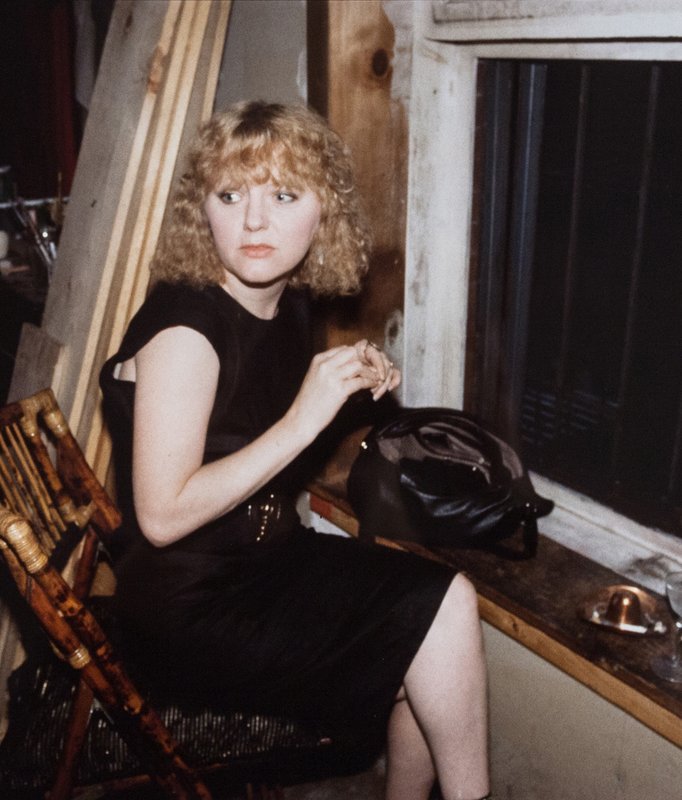 Nan Goldin was born on September 12, 1953 in a middle-class family in Washington, USA. She is a famous American contemporary photographer and a pioneer of “private documentary photography” (private photo). The Whitney Museum of Art hosted a retrospective exhibition for her in 1996 titled “I will be your mirror.” She also won the “Outstanding Photography Achievement Award” from the Hasselblad Foundation in 2007 for her contribution to the photography industry. 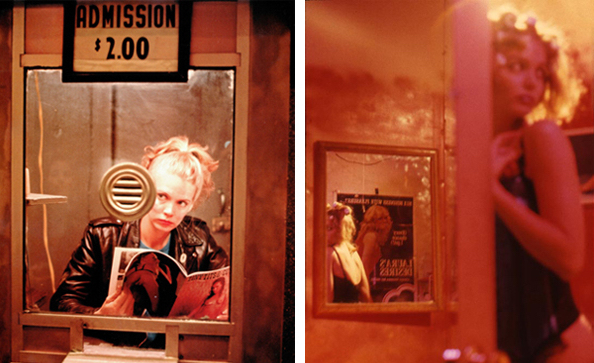 Although Nan Goldin has a wealthy family, she did not have a happy childhood. At the age of eleven, her sister committed suicide in the rails, which is undoubtedly a fatal blow to Nan Goldin. Nan once said in an interview: “Everyone is always careful about everything around him. It is an environment that corrects all untimely things. For example, the matter of suicide by my sister is also said to be a cause.” 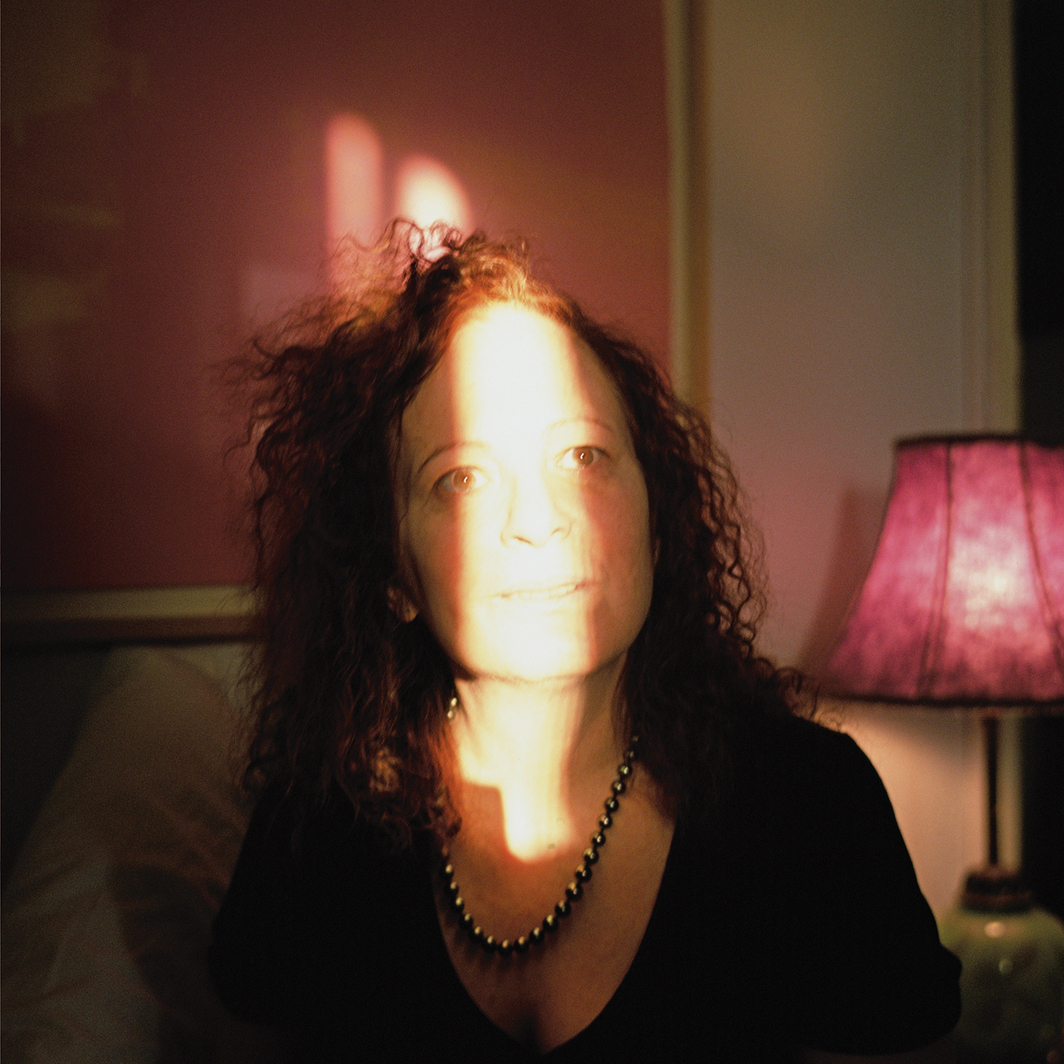 So when she was fourteen, she chose to escape from the home, where was rigid, stubborn, false and serious, to formed a new “Utopia family” with a group of young people who lived on the edge of society and loved the hippie culture. Most of these young people are artists and writers who despised traditional bourgeois life, indulged in alcohol, drugs and sex. They never live for others.

Perhaps her sister’s suicide had a huge impact on Nan, when her memories of her sister gradually became blurred, she began to fear losing her loved ones and things. Therefore, Nan decided to use the camera to record the people around her and everything that happened. “Maybe I won’t lose anything in this way”, Nan thought. 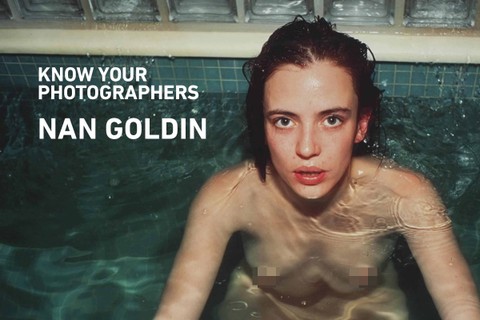 At first, Nan used an imaging camera sent to her by school and she only took pictures from ordinary life. Everything changed on 1972, when she first met Ivey, Naomi and Klett in the suburbs of Boston. Nan couldn’t hold on to joy when she focused on the three transvestites through the lens, she found her curiosity and affection for the beauty of gender blur, she likes them, she wants to be friends with them and shoots for them. 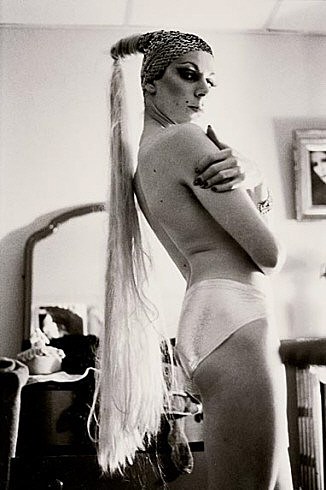 The United States in the late 1960s and early 1970s was experiencing the emancipation of the mind. Women’s Liberation Movement, Sexual Liberation Movement, Ecstasy Culture, Hippies, and Anti-war Movement, etc, have emerged in the United States. At same time, the hippie culture of the West Coast changed the attitudes and ways of life of young Americans, and in the frenzy of sexual liberation, a large number of LGBT groups began to respond. They abandon the secular ethical constraints, liberate themselves, admire freedom, that deeply attract Nan Goldin, who runs counter to traditional class thinking. 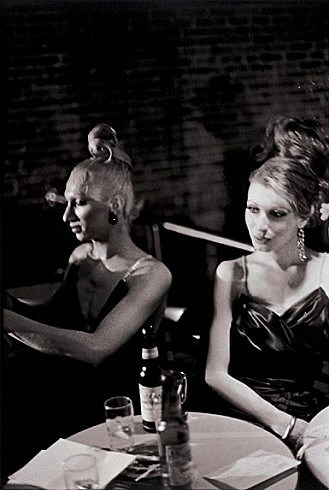 In the early 1970s, influenced by fashion photography, Nan Goldin dreamed of becoming a successful fashion photographer. She tried and committed to expressing the aesthetic sense of the model and every detail, using black and white camera to record the beautiful and confident transvestites in the party.

In the photo, her transvestite friends, determined, calm, and unduly to show their beautiful posture, this is the Nan’s early photography, which reflects the characteristics of the traditional documentary photography at that time: the photographer and the model are two individuals. They are only indifferent in their own space, with relationship but does not intimate. Moreover, the photographer records the life and state of the model, but can’t describe the essence behind the photo. 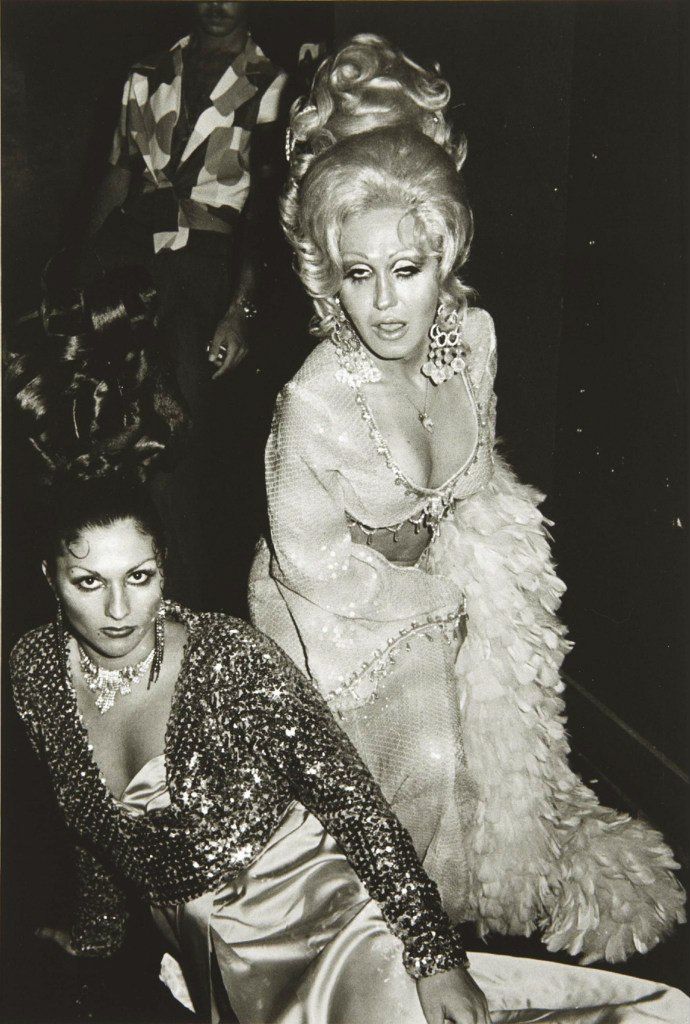 At this moment, Nan was unable to photograph with her own style. Even though she and the transvestite were close friends, this relationship was not reflected in the photos. Time came to 1974-1977, due to the advantages and convenience of colour cameras, coupled with the successful creation of the photographer Ernst Haas, who is dedicated to the study of colour photography, people began to accept the concept that the colour photography is also an art. The colour camera thus further replaces the black and white camera and becomes the most widely used tool in photography. Meanwhile, she began to experiment with colour photography at the Boston Museum of Pure Art. The Narrative of Sexual Dependence, created between 1980 and 1986, is the most famous colour photography she has ever produced. 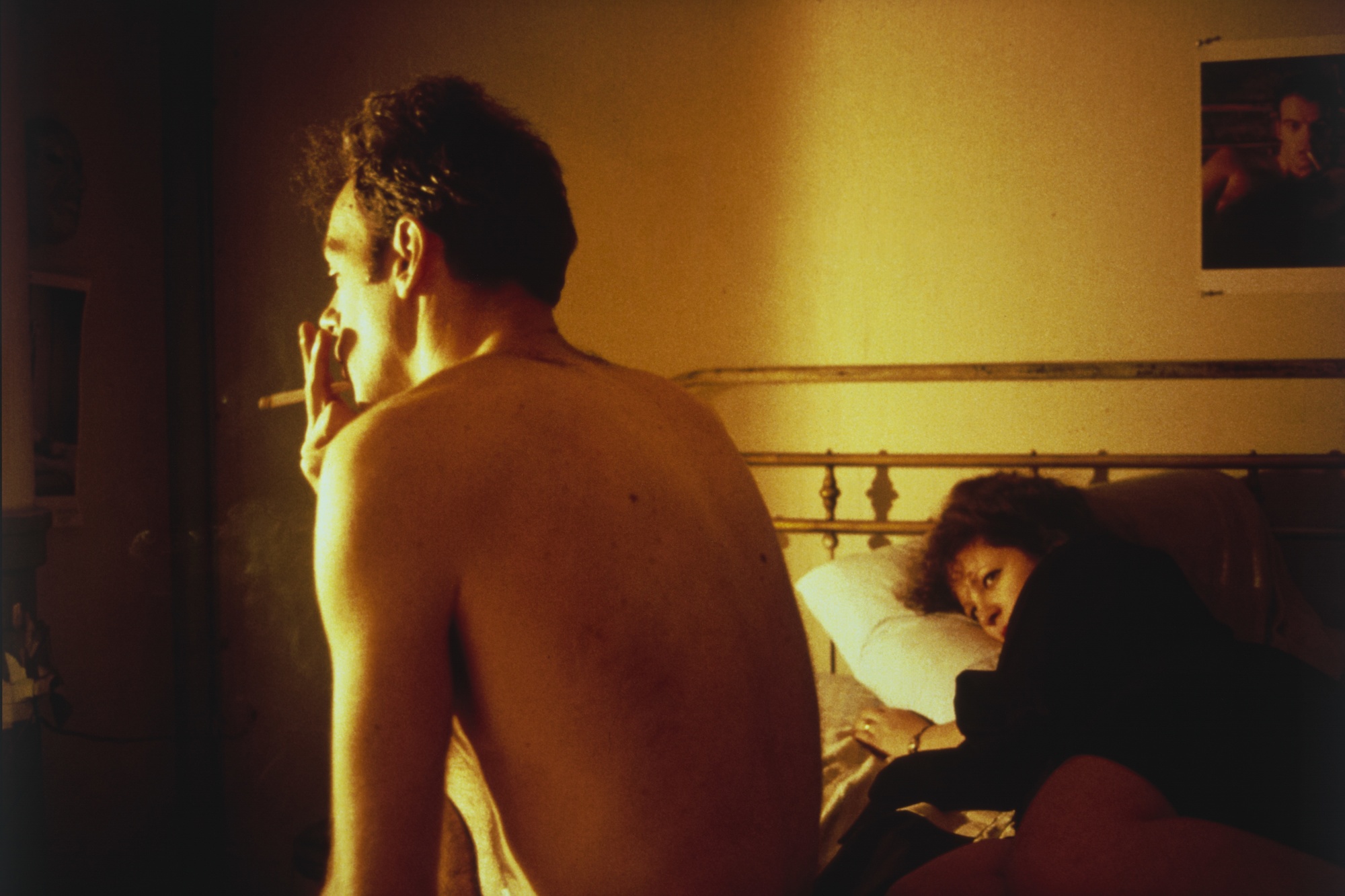 On the cover of the photographic collection of “The Ballad of Sexual Dependency”, Nan shows us the life between her and her boyfriend, Brian. The man exposed upper body was smoking while sitting on the bed, where the warm orange light depicted his outline. Obviously he was relaxed, comfortable, completely invaded in his own world, and the woman who around him seemed to be transparent. In the corner, the woman in a black coat lying on the bed, full of confusion and panic in her eyes, curled up and looked at Brian. This is a photo of oppression and loneliness, even though the distance between the two is very close, even more the clothes with a sense of distance are removed. If Nan photographed her transvestite friends in the early days to doubt the exact definition of men and women and the stability of their relationship, then she broke through traditional documentary photography when she created in the 1980s, and drew her distance from the model infinitely, even focused on her personal life, was exactly aimed to explore the definition of gender and the relationship between two sexed both on the physical and psychological. 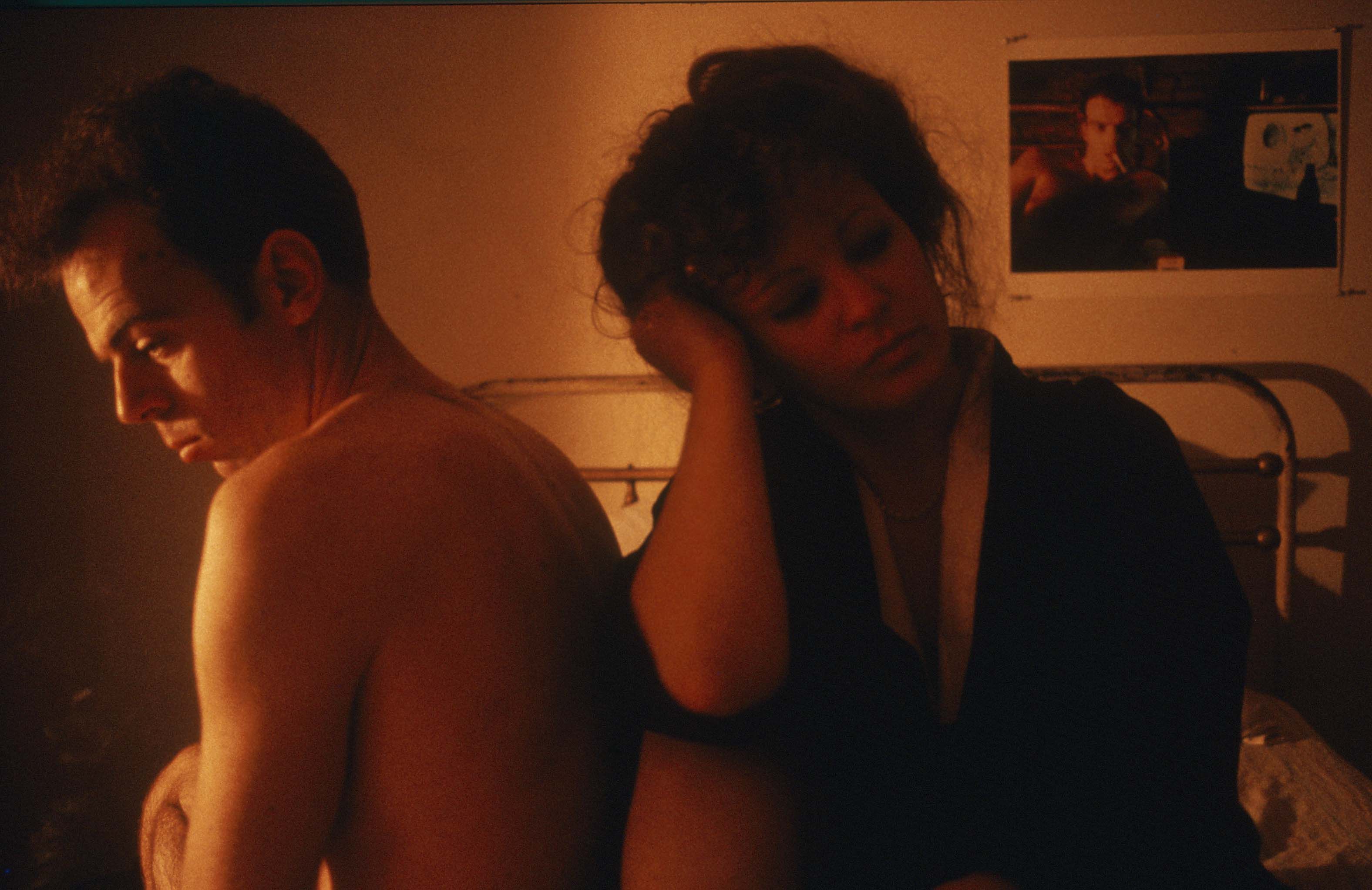 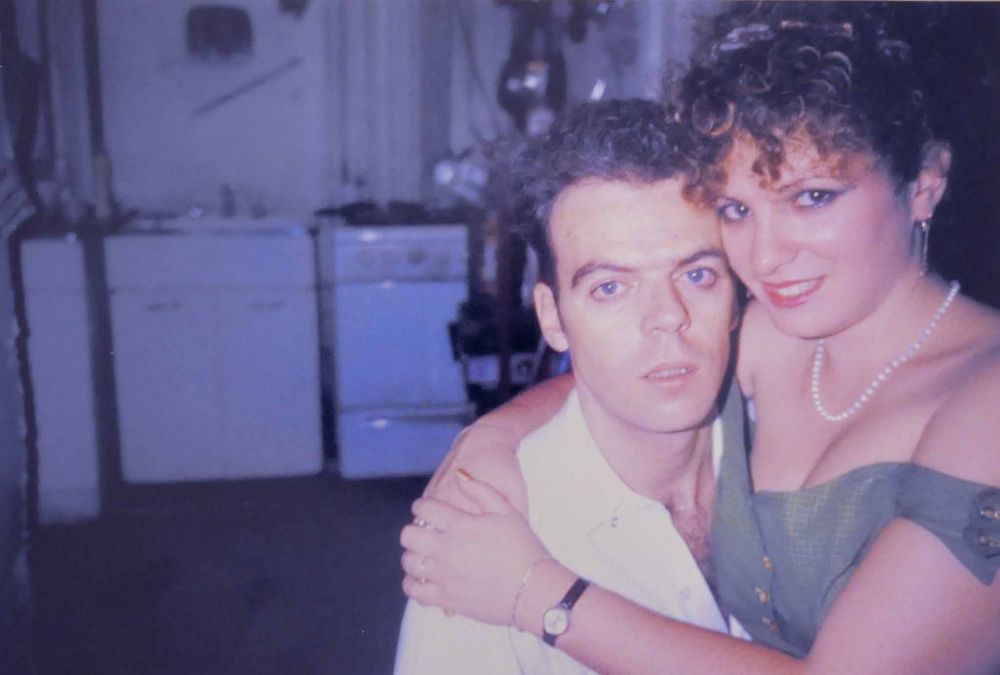 In 1978, Nan Goldin came to live in Manhattan, New York. Here, she met more artists who are obsessed with subculture, punks, transvestites and homosexuals. Simultaneously, Nan’s unique and artistic way of playing photos with slides and music formed. It is important to know that at the time, photographs were published in newspapers, magazines or in exhibition halls. Owing to the uniqueness of Nan’s photographs, the “The Ballad of Sexual Dependency” quickly gained the “voice” of discussion in the art world, and Nan became to a up-and-coming Photographer. 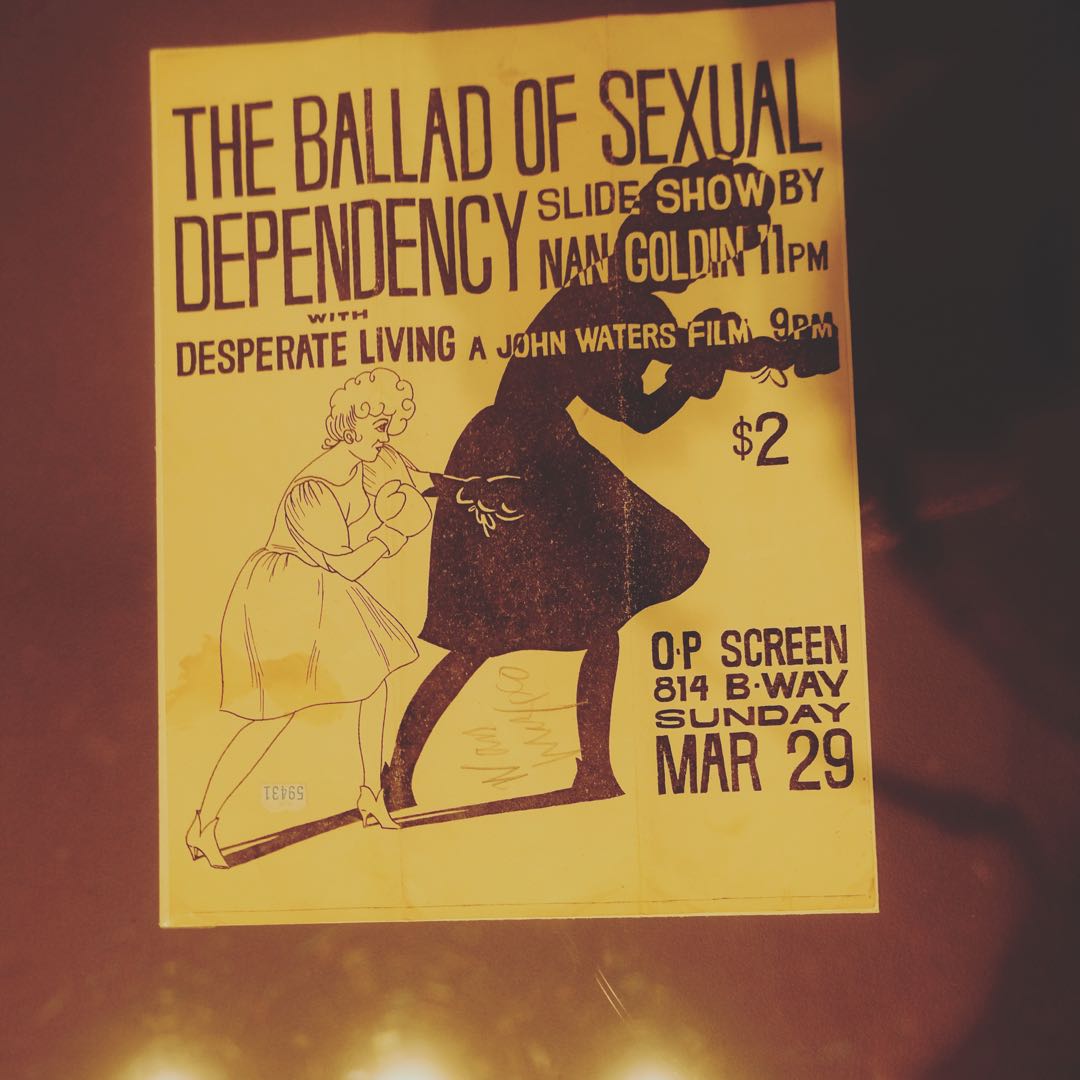 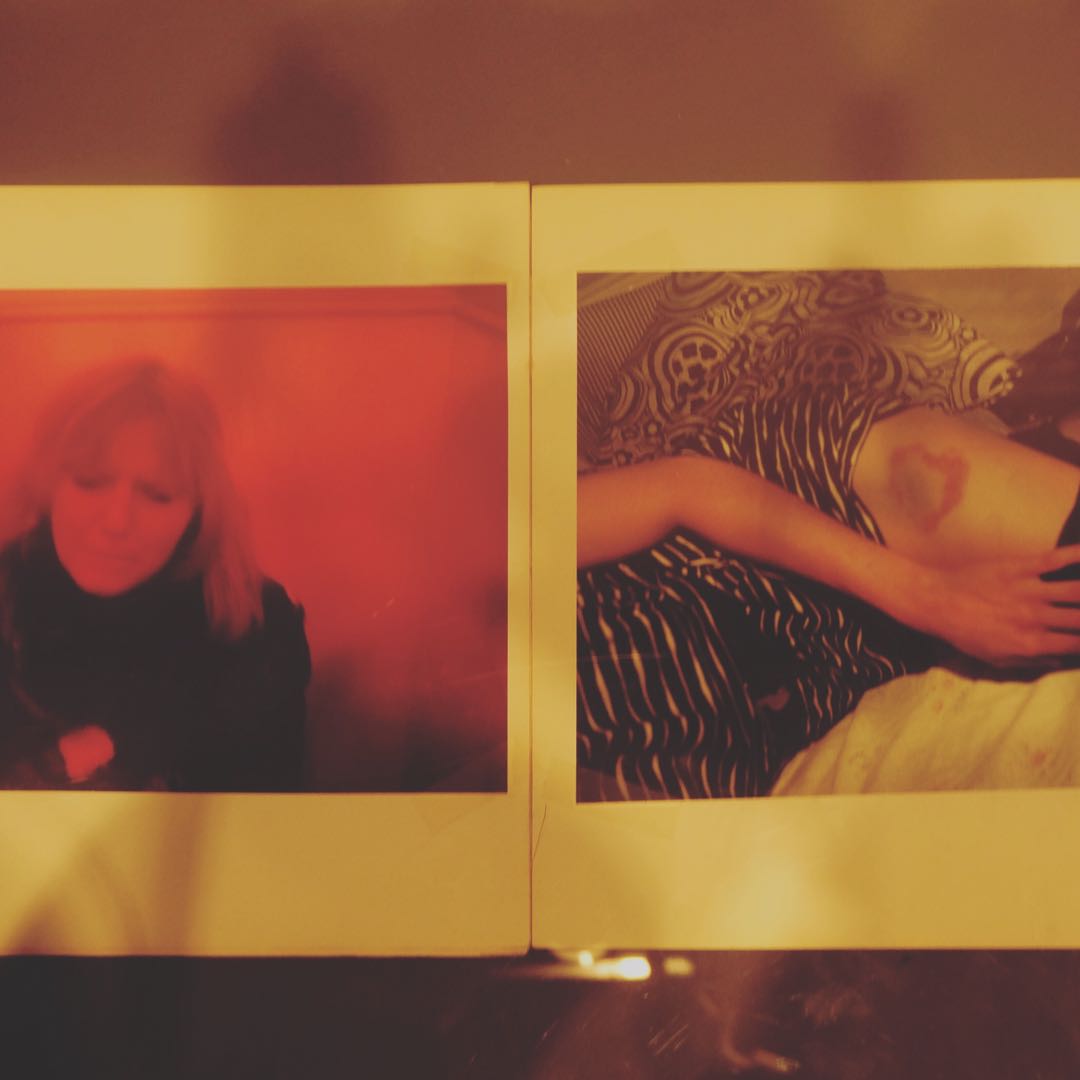 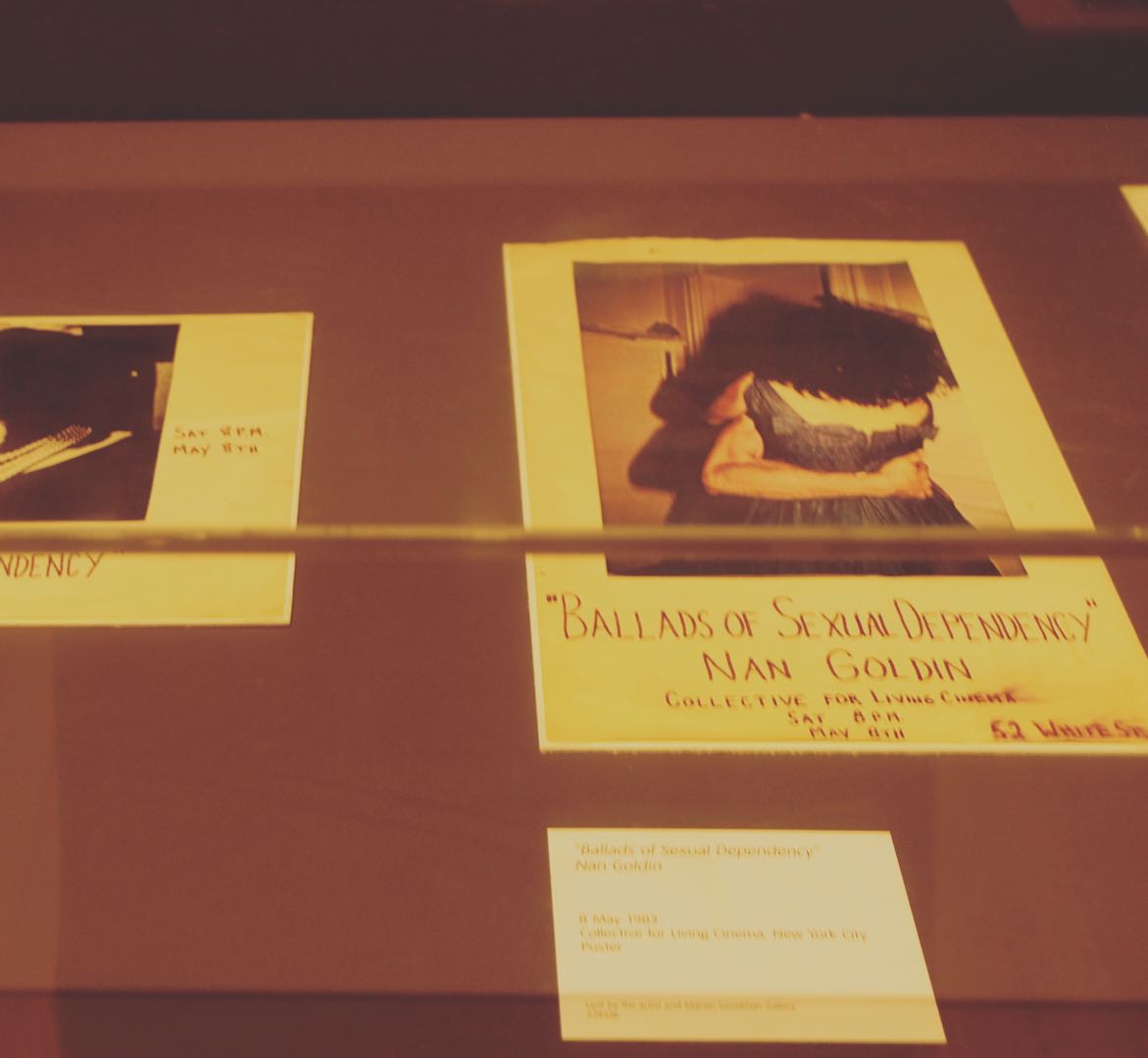 Another famous photo collection of Nan is “The Visual Diary”.

In “Visual Diary”, Nan further explored the inequality and instability of the relationship between men and women by showing the relationship and the change of distance between her and her boyfriend Brian. As Nan’s boyfriend and model, Brian beat, insulted Nan and even almost wiped out her eyes. “Visual Diary” is like a silent film that stimulates people’s nerves and records Brian’s abuse of Nan. The picture named “Nan, who was beaten after a month” is the “work” of Brian.

For her as a photographer, how important the eyes are, but she almost lost them.

She vowed never to return to Brian’s side. Later Nan included this photo in “The Ballad of Sexual Dependency”, this had a big impact at the time. A female photographer calmly faces the camera and records how she has been beaten– what she wants to express is not just introspection, fragility and pain, but the harm caused by the imbalance or even opposition between the two sexes. 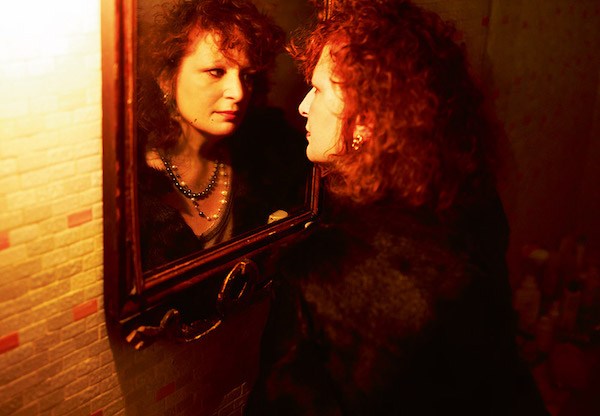 In “The Ballad of Sexual Dependency”, Nan also preserved her many years of memories: the death of family and friends, the breakdown of relationship, the gathering of friends, and Naomi wearing a gorgeous dance dress with laughing. . Through these photos, Nan not only reveals the fragile and sensitive side of human nature, but also expresses the relationship between desire and loss, joy and sorrow, sex and lovelorn, which seemingly contradictory but symbiotic coexists. She first wants to prove is the universal theme of human destruction: the inevitable collapse of love relationships, the indulgence of desires, the loss of loved ones and friends, and the illusion of escape from reality.

Nan Goldin is a photographer of the era. She has broken through the traditional documentary photography mode by intervening in her own photography. She completely integrates into the life of the model and makes the model feel completely comfortable. She is not a snooping, but participants. 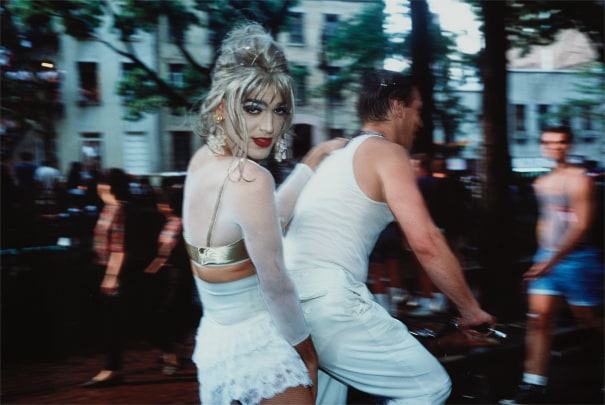 In her photos, everything is real and there are no fictional elements. “I don’t like the forged world, we need the real world, so we need photography as evidence to tell us the truth,” Golding said. 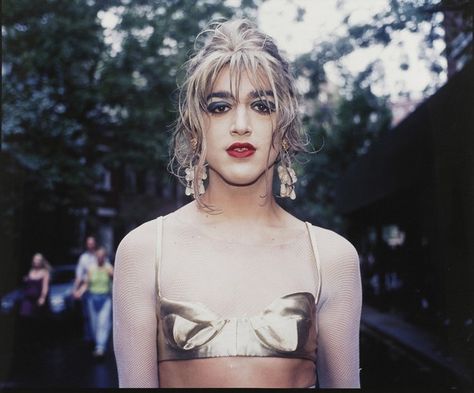 It can be said that Nan Goldin is a very talented female photographer. Before her, few photographers paid attention to and continued to shoot LGBT groups and related subcultures. Besides, few people realized that LGBT groups have dignity and bottom line. Transgenders and transvestites living on the edge of the city have allowed Nan to see a non-traditional, alternative idealized country: a country that is free to control its own destiny. 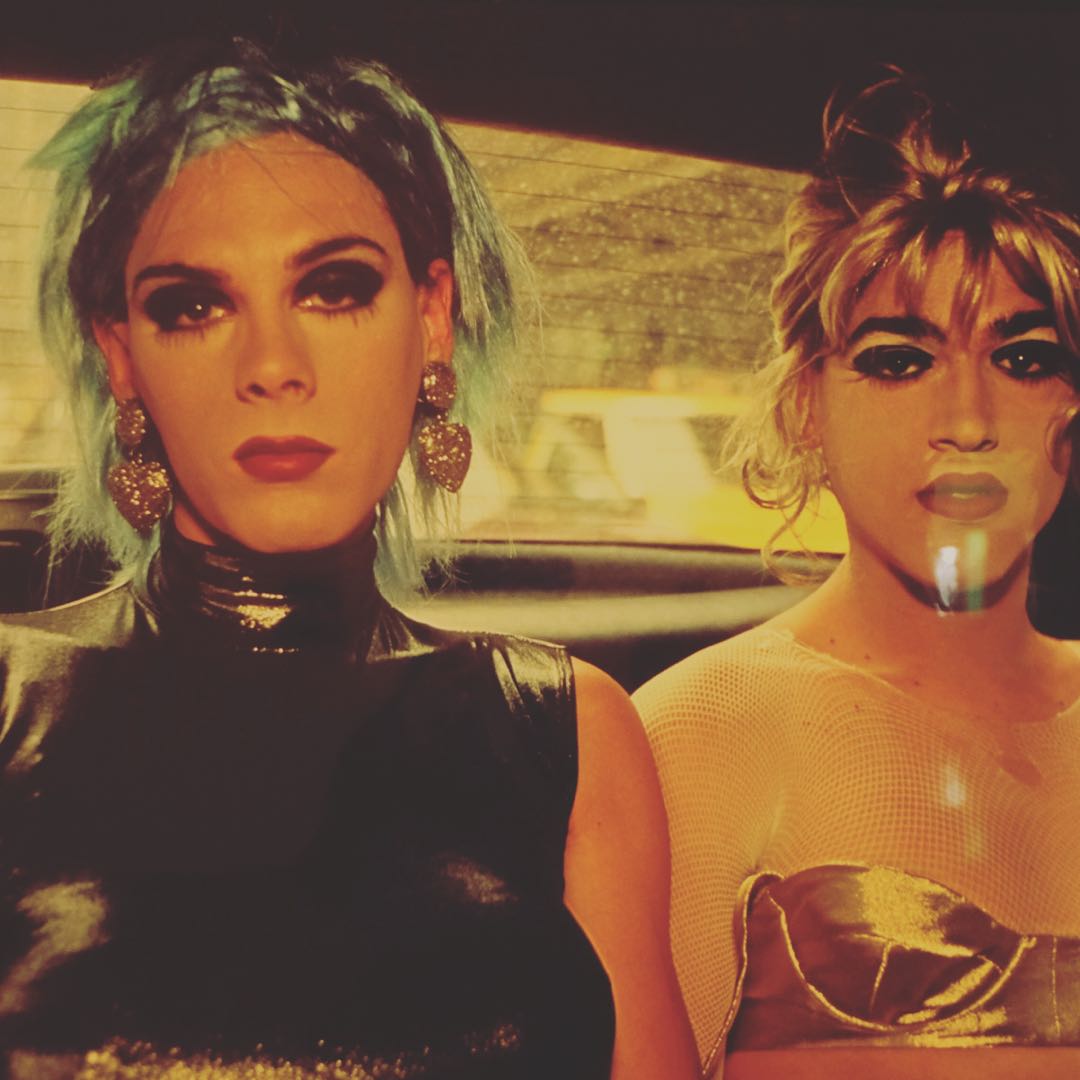 Nan believes that this is the ultimate act of autonomous independence. In decades of photography life, Nan is not shooting her transvestites, transgenders, and gay friends, but set up a mirror to faithfully reflect the world. She insists on telling people the truth: physical limitations do not hinder the height of the spirit.

She appreciates transgender people, they are completely free. 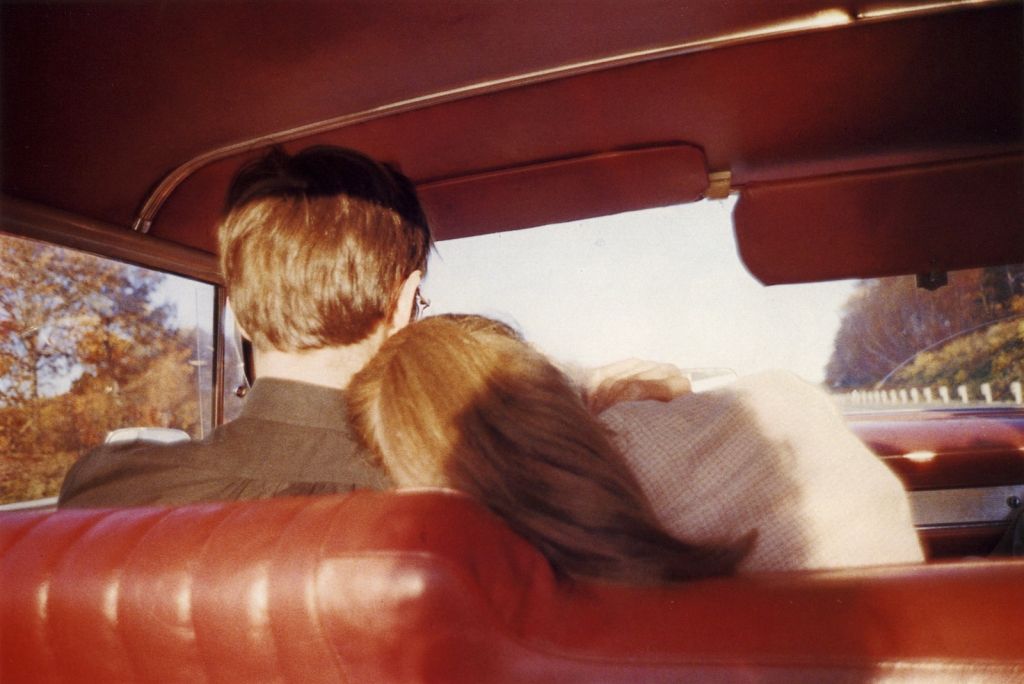 “Including our parents, the mass media has nurtured us, made us social, gave us entertainment, comforted us, it deceived us, and bound us, telling us what to do, what should not to do. In the process of transforming us from a woman of personality to the same person, it plays the most critical role: through American printing presses, projectors and TV channels, it shapes us into traditionally good women and bad women. For the female concept, these are already the most important legacy of the public media: put all the neatness into one. ”

PreviousPrevious post: Tim Walker: Wonderful Things
NextNext post:Lucian Freud: I only turn my unflinching eye firmly on myself
This website uses cookies to improve your experience. We'll assume you're ok with this, please click Accept to continue.Accept Read More