This exhibition showcases some of the most impactful photographs captured over the last 60 years. It includes many of his iconic war photographs – including images from Vietnam, Northern Ireland and more recently Syria. But it also focuses on the work he did at home in England, recording scenes of poverty and working class life in London’s East End and the industrial north, as well as meditative landscapes of his beloved Somerset, where he lives.​ 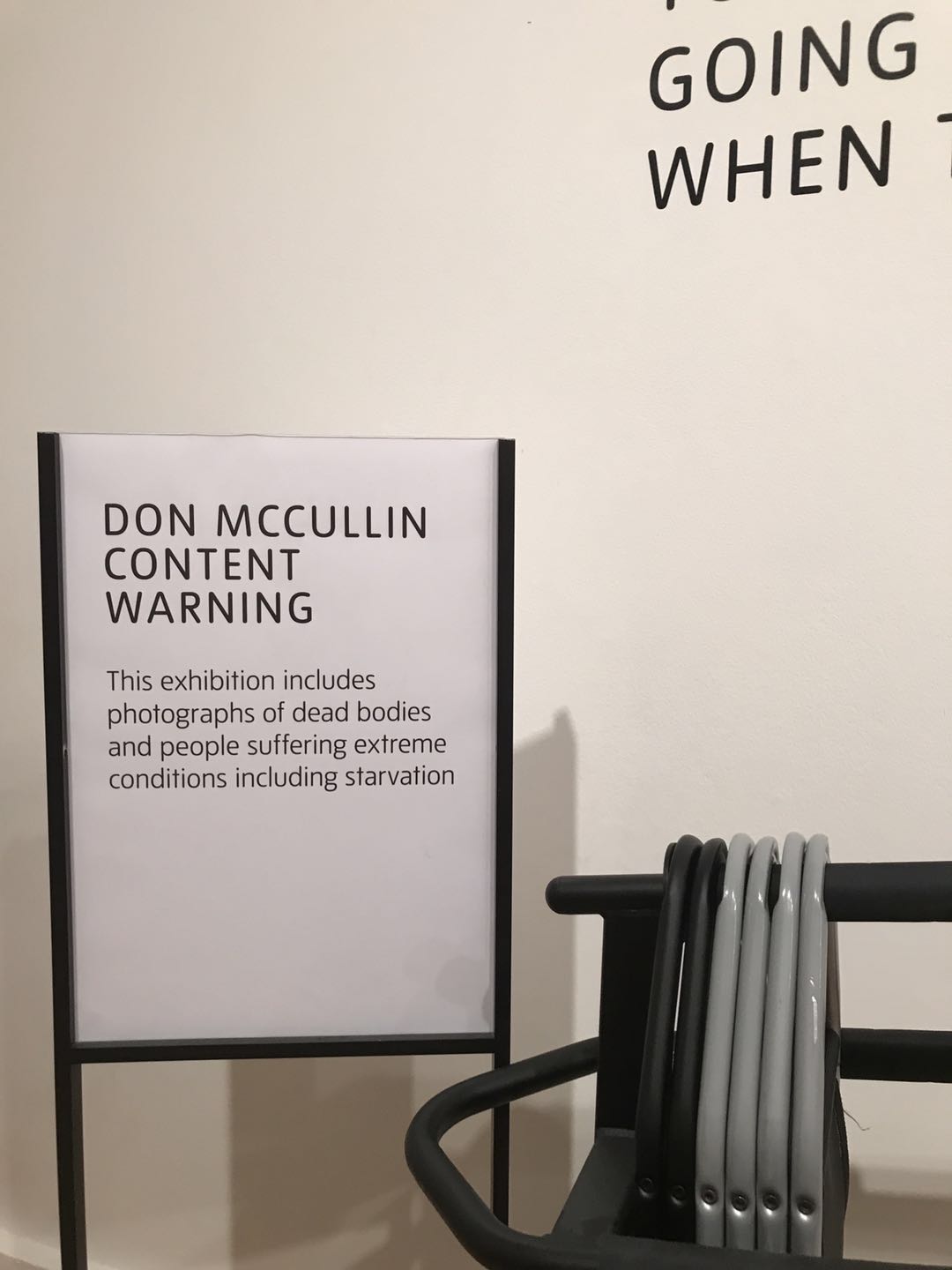 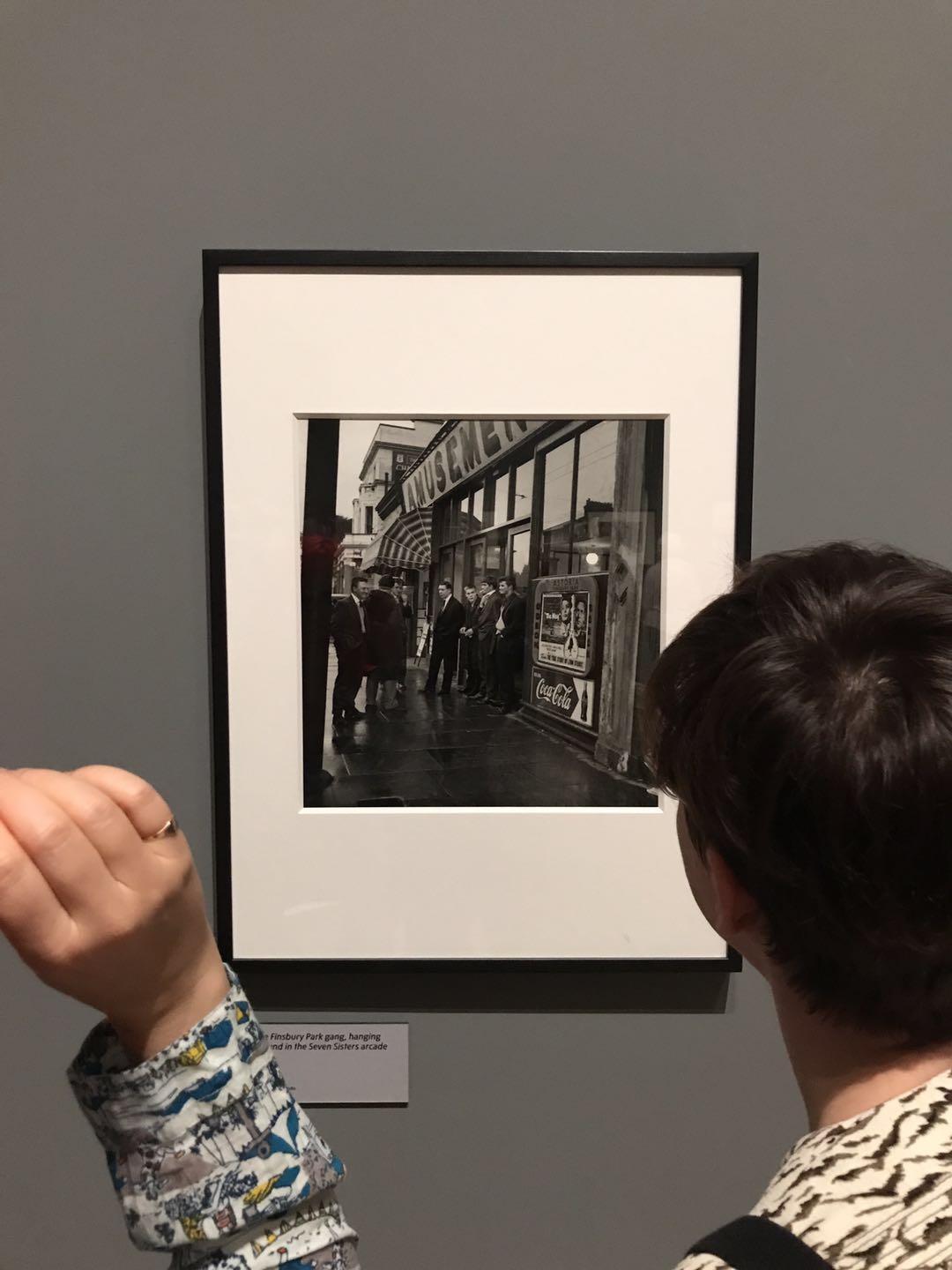 Sir Don McCullin was born in 1935 and grew up in a deprived area of north London. He got his first break when a newspaper published his photograph of friends who were in a local gang. From the 1960s he forged a career as probably the UK’s foremost war photographer, primarily working for the Sunday Times Magazine. His unforgettable and sometimes harrowing images are accompanied in the show with his brutally honest commentaries. 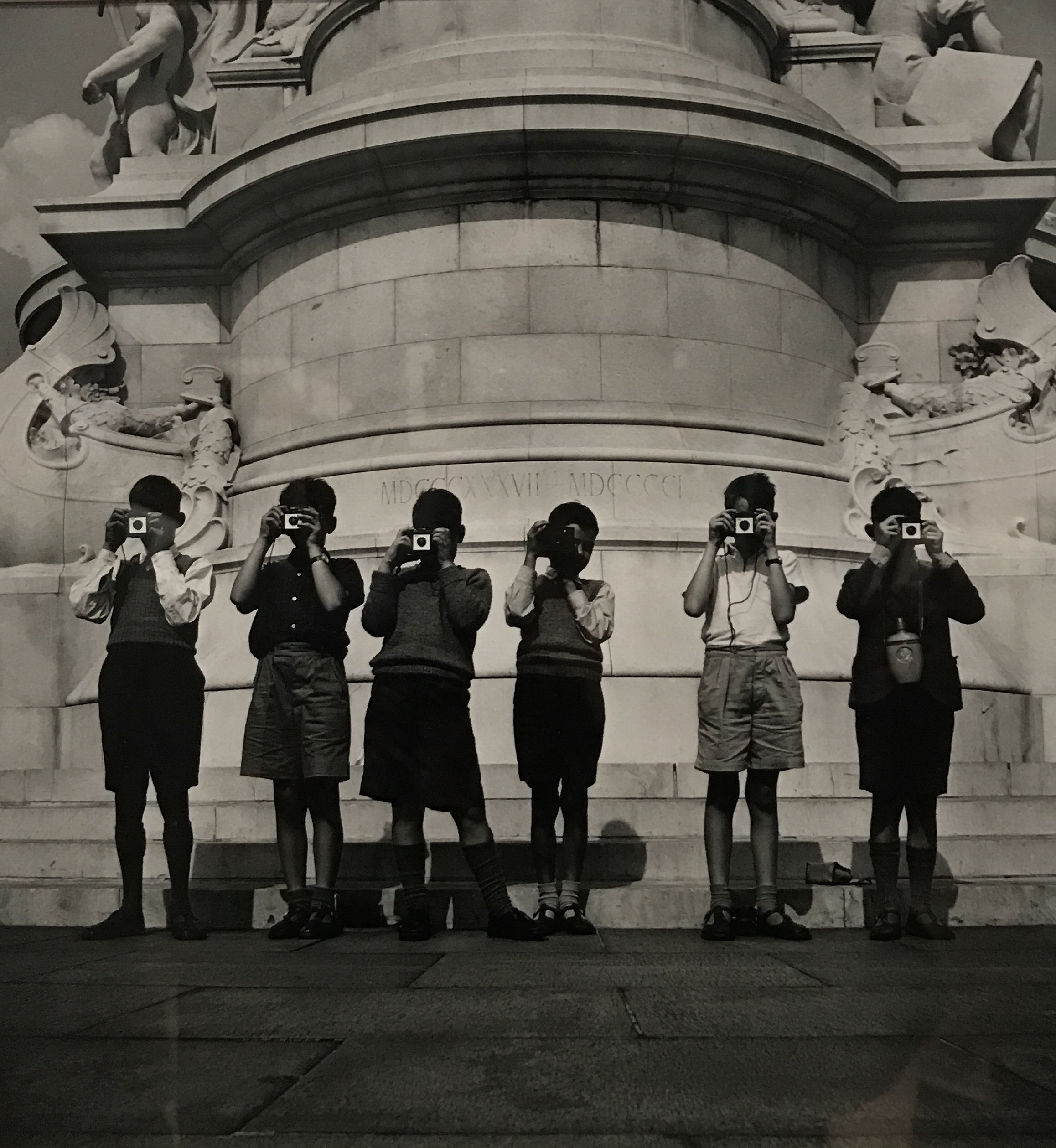 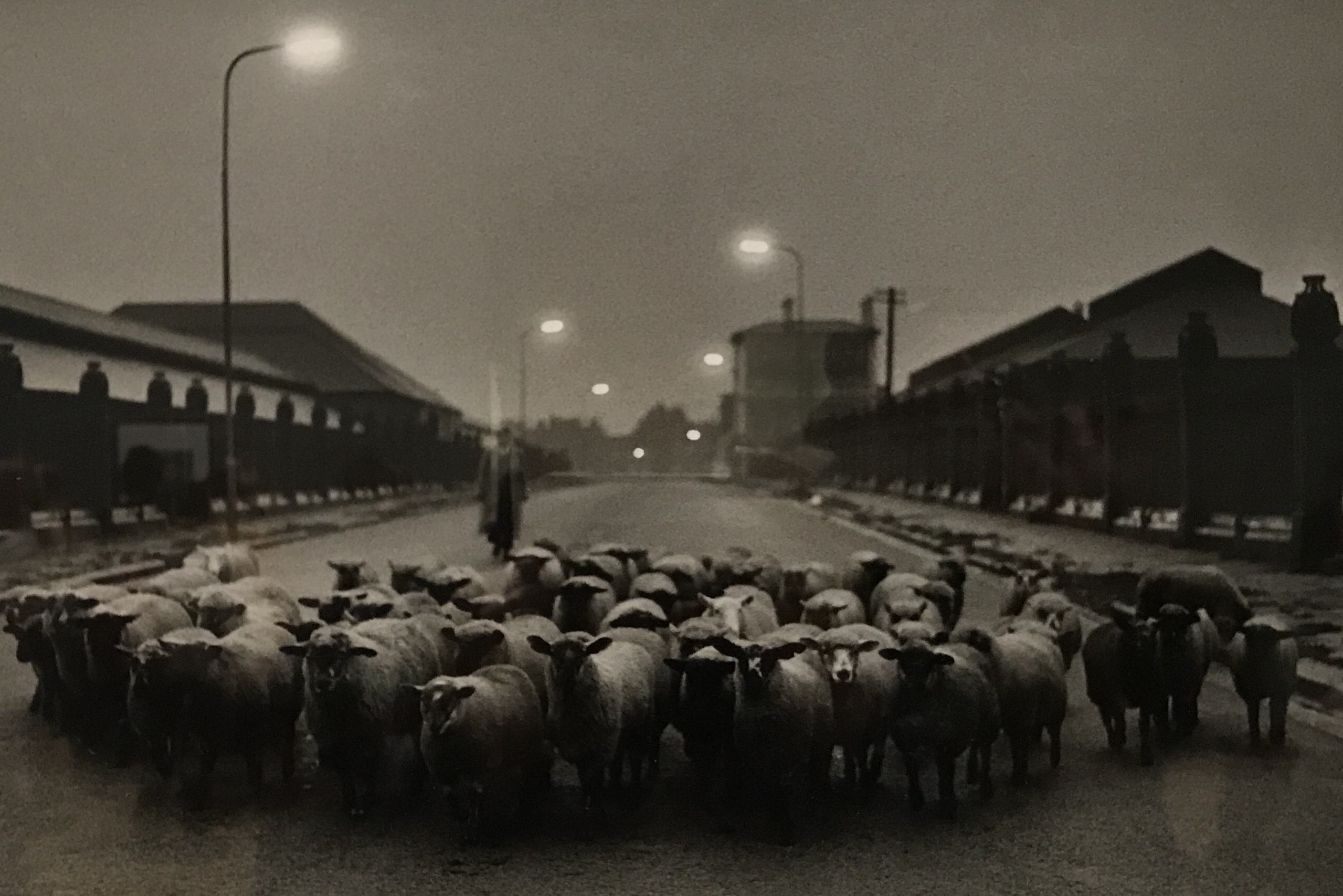 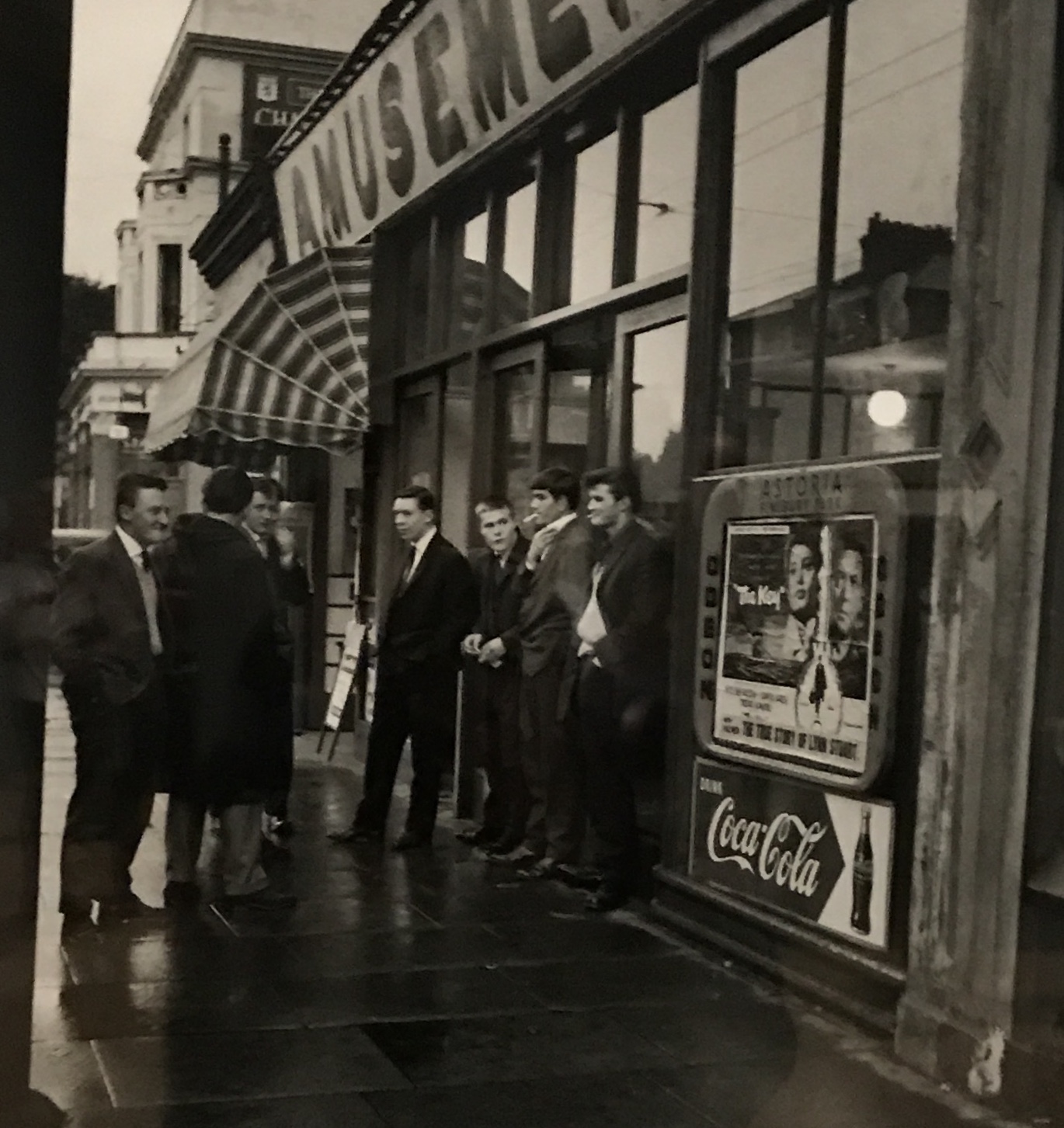 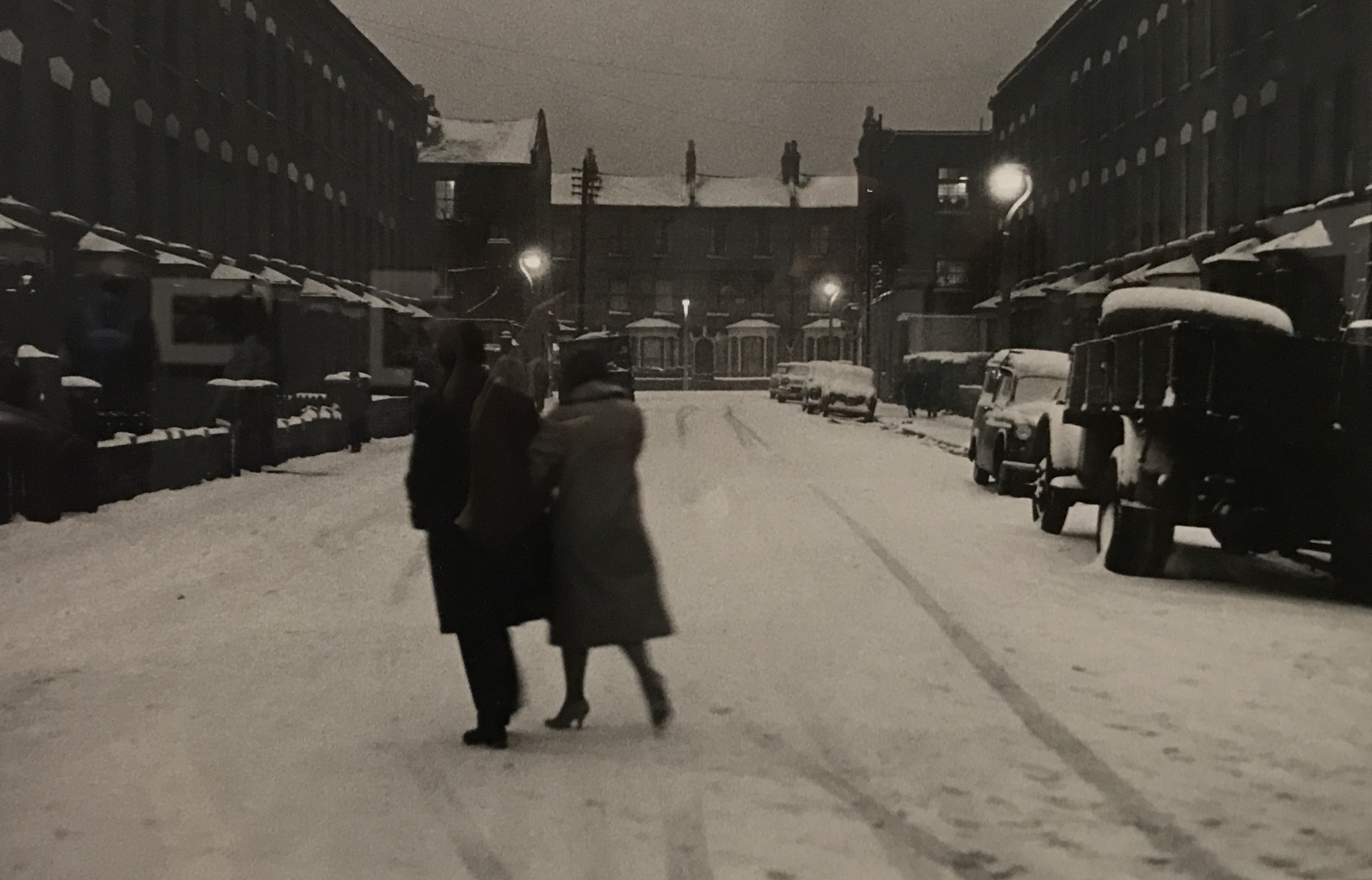 McCullin went on to document the building of the Berlin Wall, as the temporary structure gave way to armed checkpoints and concrete. Those images helped to launch a career as a photojournalist that took him to conflicts in places including Cyprus, Vietnam, Lebanon and Northern Ireland – although now 83, he has retired to photograph British landscapes. Often risking his own life, McCullin didn’t flinch from scenes that might have been too disturbing for many viewers – children with the unmistakable anatomy of the starving; men being tormented before being executed; families grieving over the dead bodies of their loved ones. 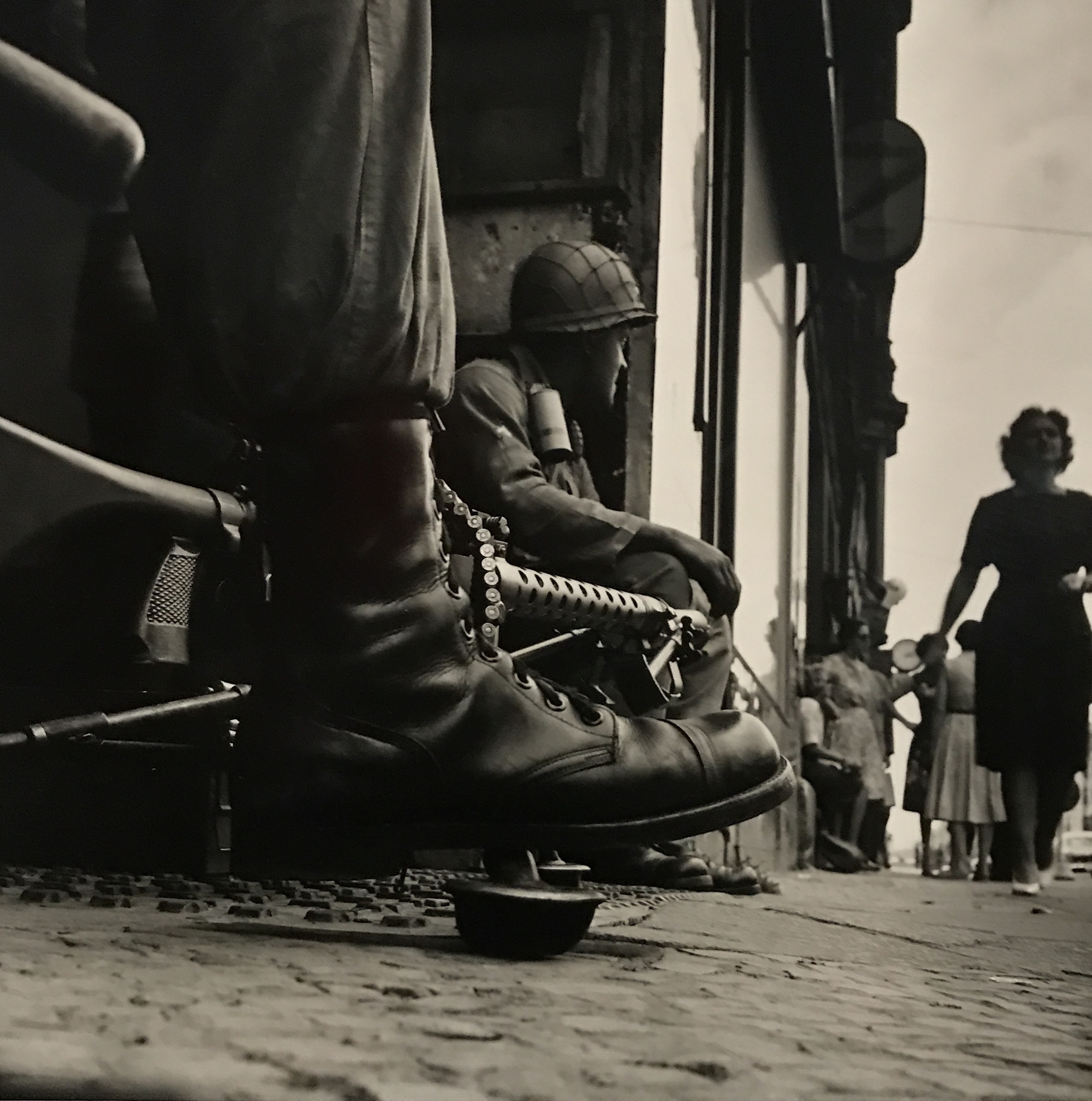 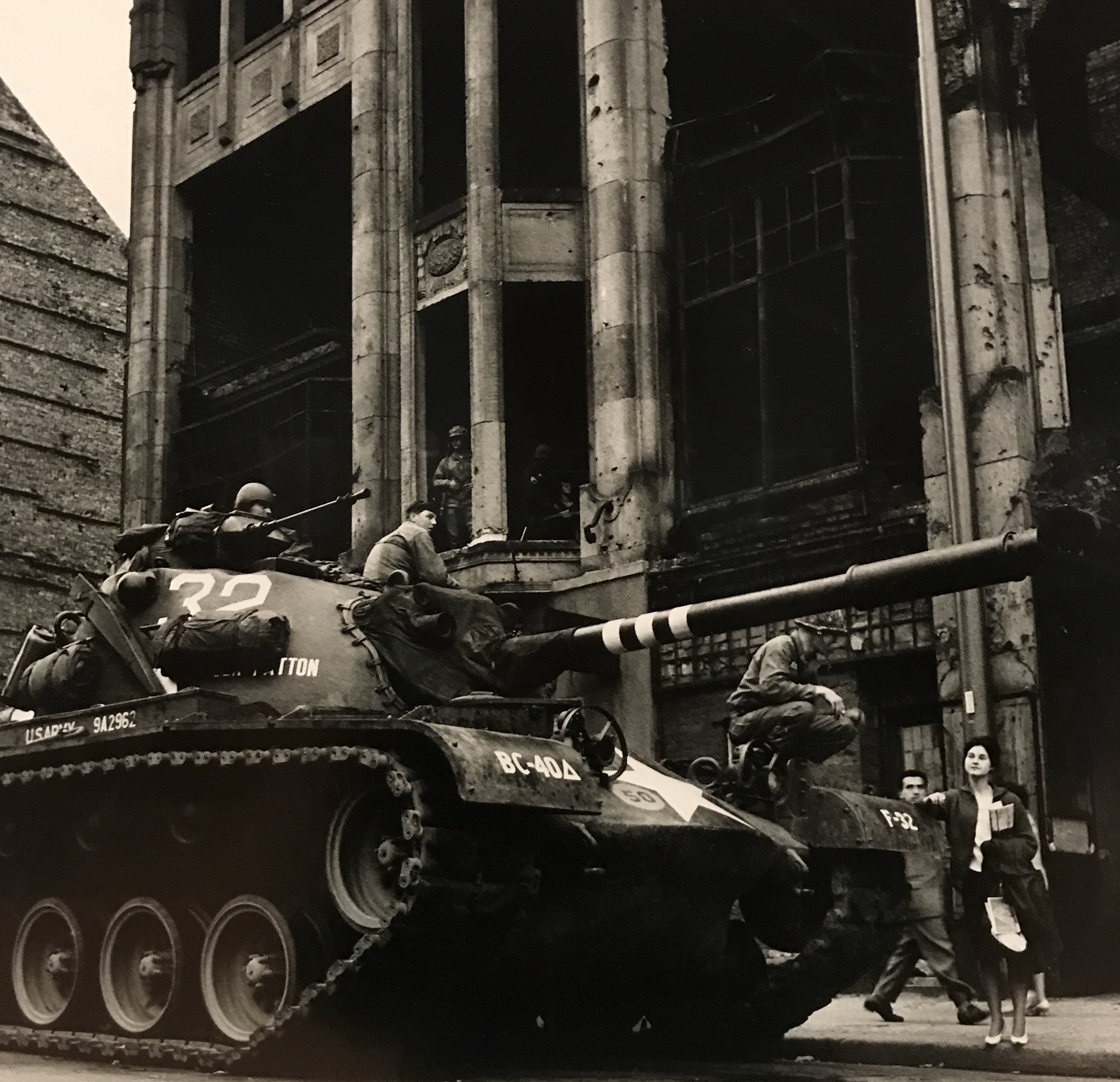 With more than 250 photographs printed by the artist himself in his own darkroom, and while a large number are distressing, there is something in them that makes it hard to look away. Partly, it’s how close McCullin brings us – somehow, we are complicit by simply viewing what’s going on. Once we see, we can’t unsee. 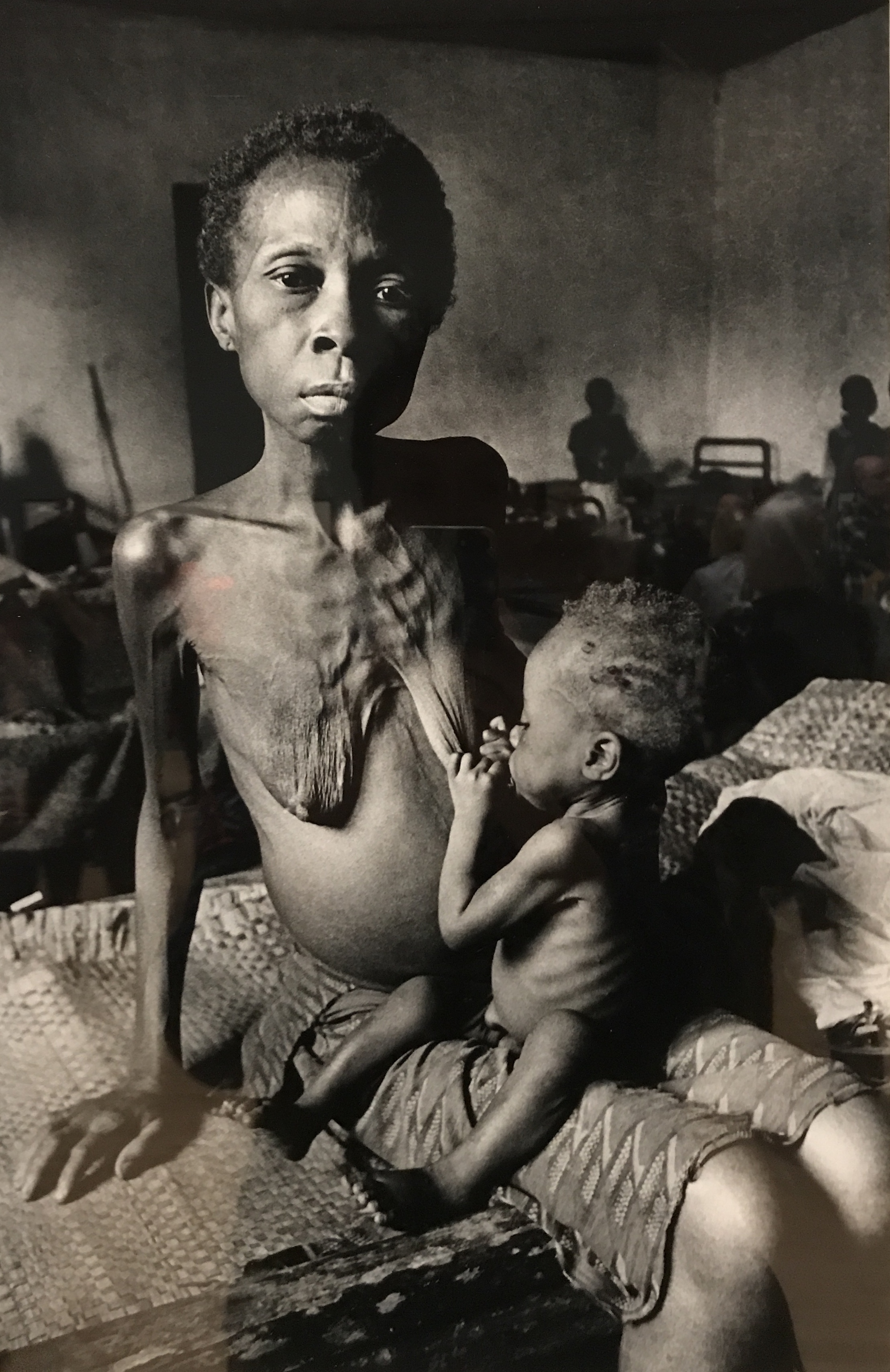 And that closeness was intentional. “I don’t believe you can see what’s beyond the edge unless you put your head over it,” McCullin is quoted at the Tate exhibition. “I’ve many times been right up to the precipice, not even a foot or an inch away. That’s the only place to be if you’re going to see and show what suffering really means… Seeing, looking at what others cannot bear to see, is what my life as a war photographer is all about.”

A photo taken in Vietnam in 1968 reveals a man launching an object into the air, striking uneasy parallels with images of athletes. But the reality behind the grenade-thrower’s pose is brought home in the accompanying label. According to McCullin: “He looked like an Olympic javelin thrower. Five minutes later this man’s throwing hand was like a stumpy cauliflower, completely deformed by the impact of a bullet.”

In 1971, the Sunday Times Magazine sent McCullin on assignment to Northern Ireland. The armed conflict there – which became known as the Troubles – often took place on the streets in residential areas between Catholic and Protestant communities. One of McCullin’s photos, showing young boys running away from CS gas fired by British soldiers and jumping over a graffiti-covered wall, looks eerily like a photo from a battlefield trench. Another, in which a Catholic youth incongruously dressed in a suit and tie raises a wooden plank against soldiers in riot gear, offers an unsettling omniscient view – allowing us to see along the two walls hidden from each other by a corner. 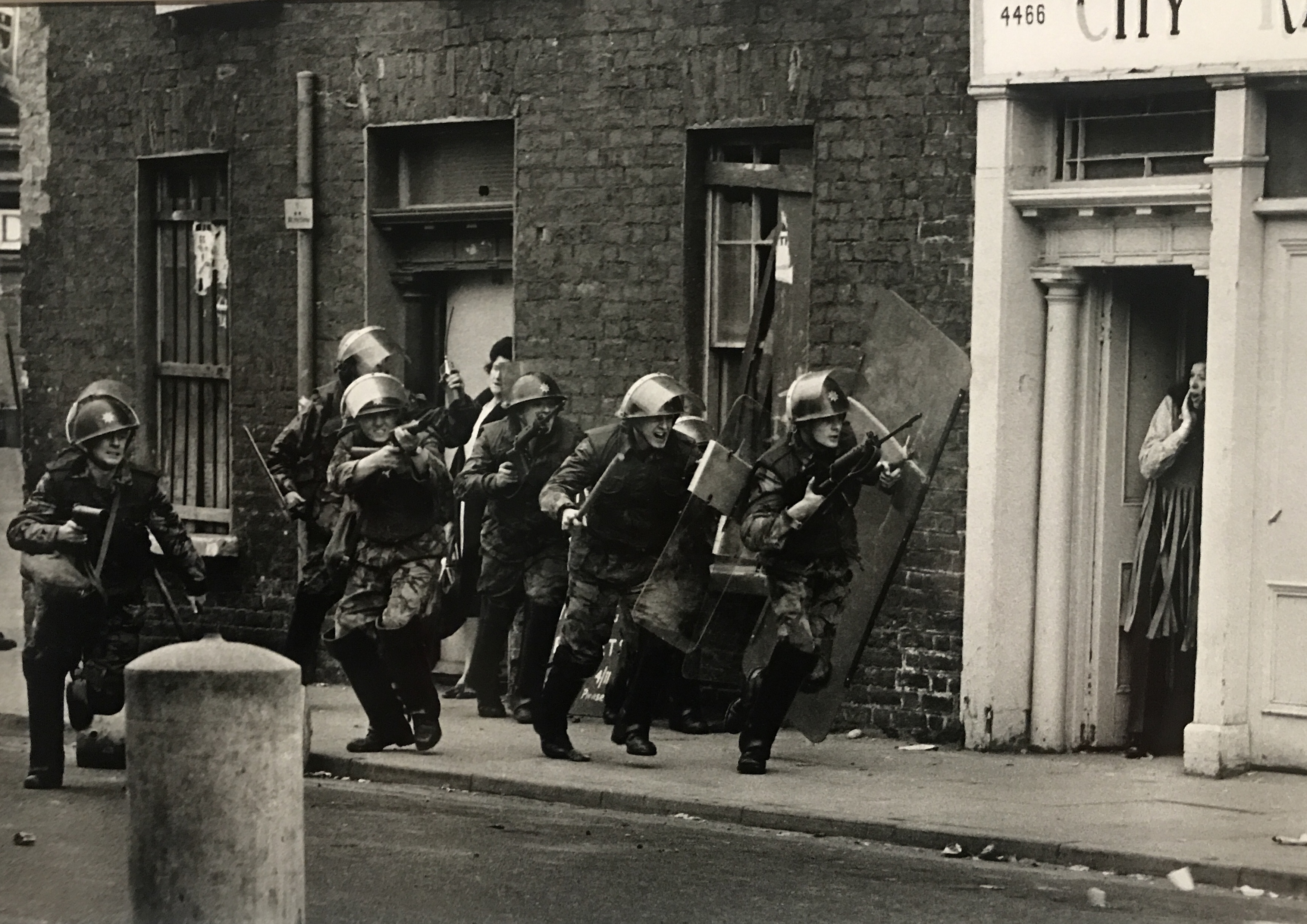 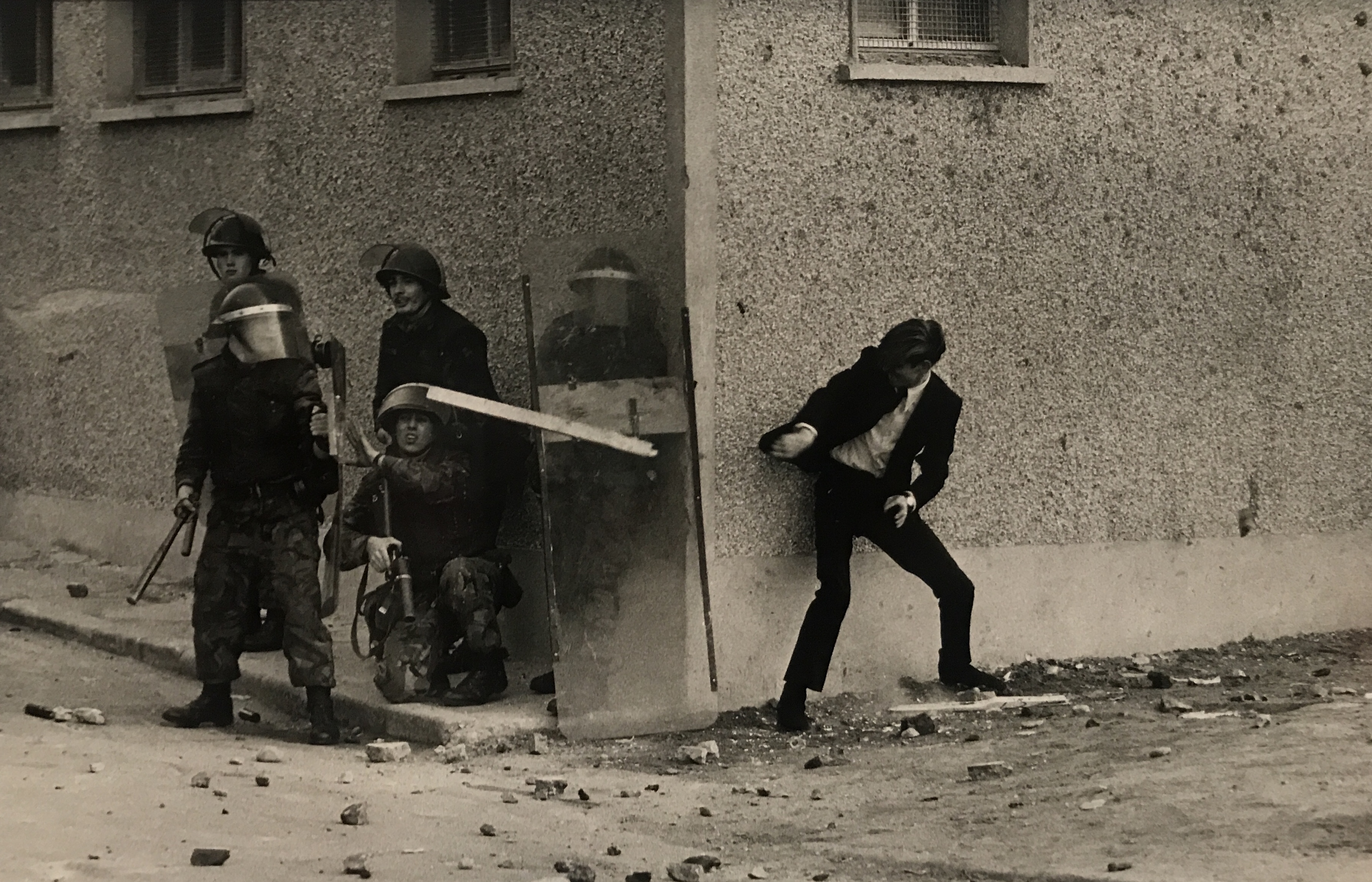 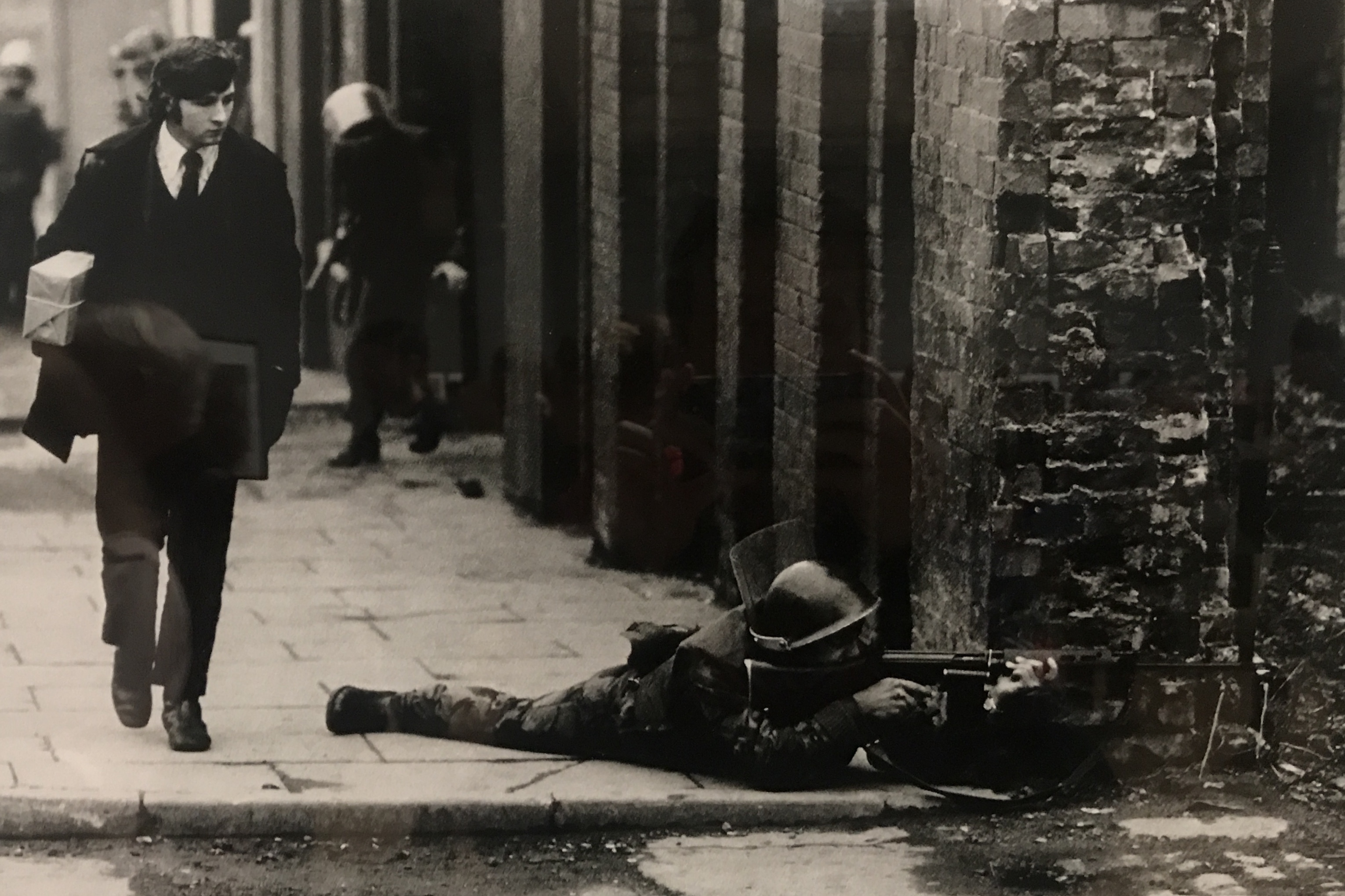 McCullin believes it’s important to fix our gaze on what makes us uncomfortable. “You have to bear witness. You cannot just look away,” he is quoted in the exhibition. And he doesn’t aim to take sides. His images of US marines in Vietnam offer a disturbing record of PTSD at a time before it had been fully recognised.

There is a moral imperative driving McCullin. “We cannot, must not be allowed to forget the appalling things we are all capable of doing to our fellow human beings.” Even when documenting unspeakable horror, he hopes to be able to convince us to keep looking. “Often they are atrocity pictures… But I want to create a voice for the people in those pictures, I want the voice to seduce people into actually hanging on a bit longer when they look at them, so they go away not with an intimidating memory but with a conscious obligation.” 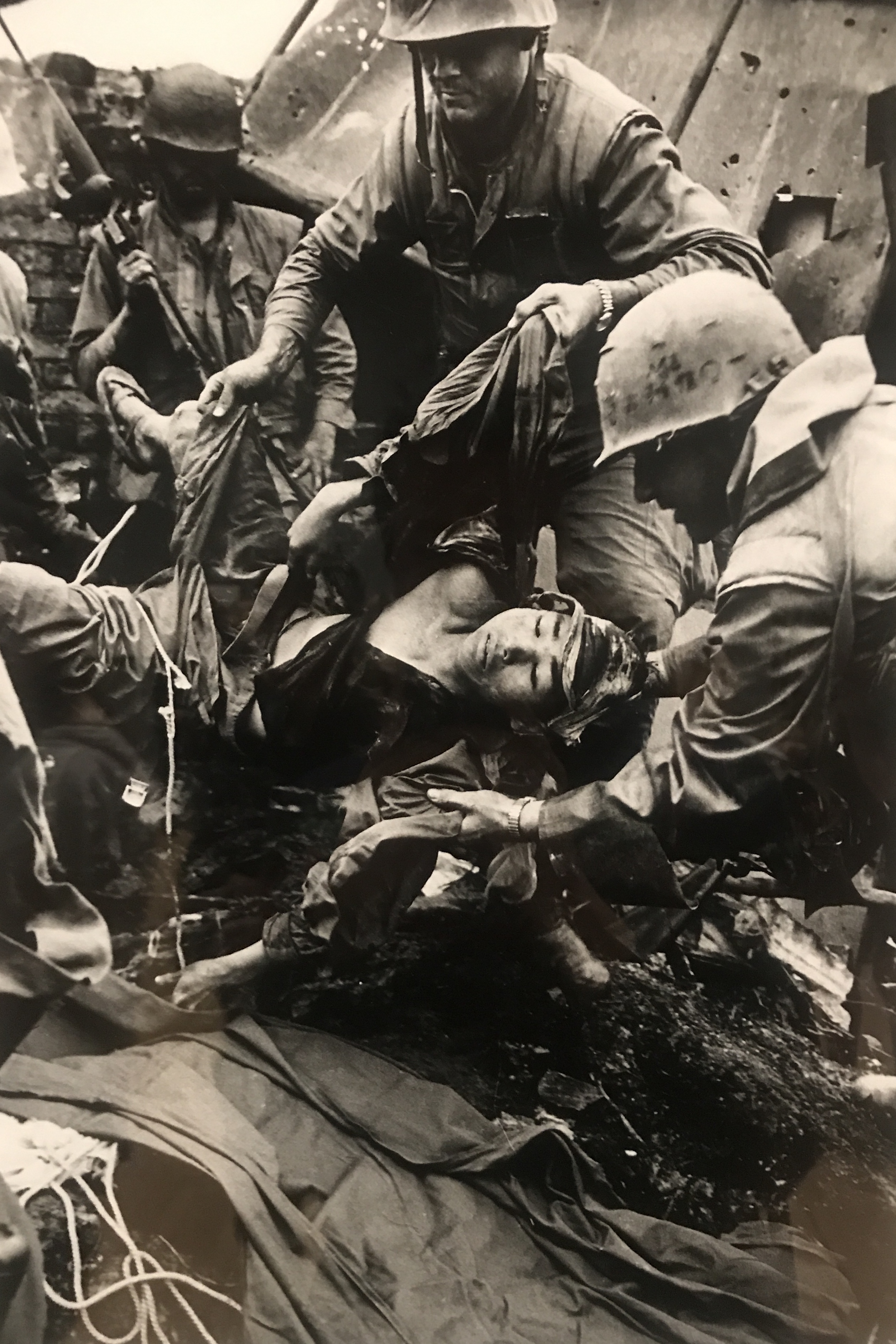 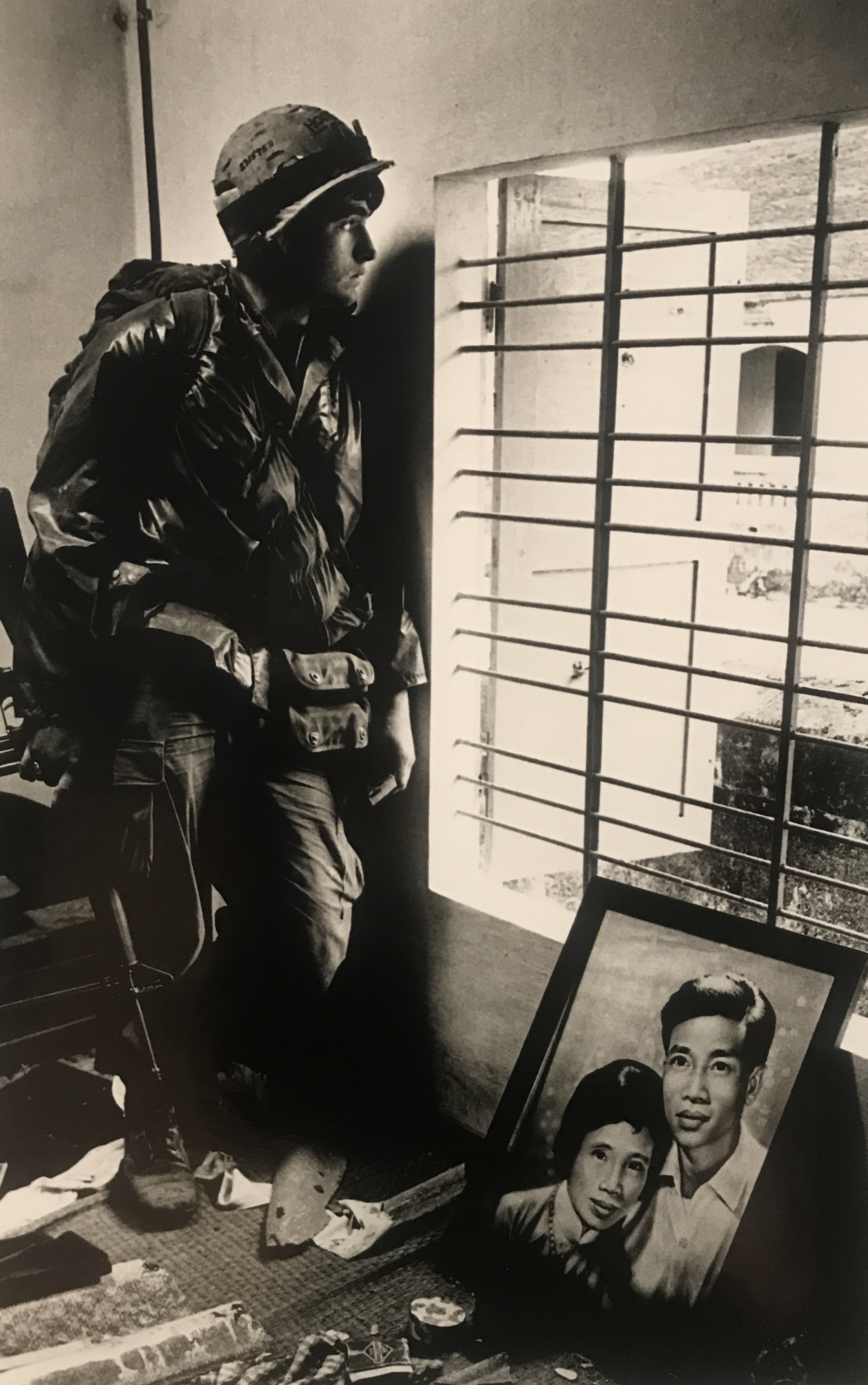 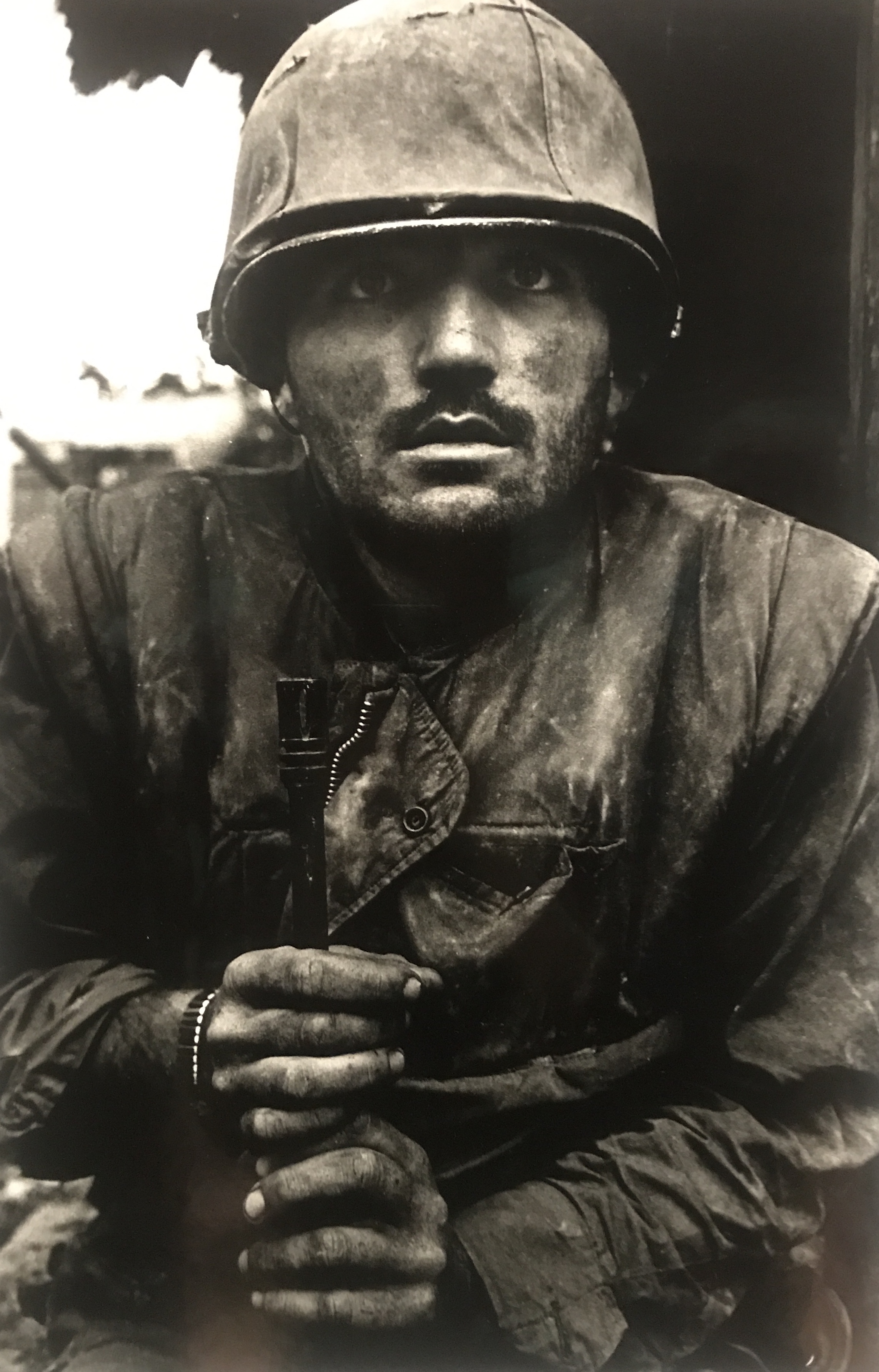 And McCullin has documented other types of battleground. “There are social wars that are worthwhile,” he is quoted in the exhibition. “I don’t want to encourage people to think photography is only necessary through the tragedy of war.” His photo of a homeless Irishman, taken in London in 1970, is one of his best-known images. “I operate not as a photographer but as a human being,” he says in the photo’s description. “I try to balance what I photograph not as a photographer but as a person, a man, and photography has got nothing to do with it. It is just something I have learnt, it is just a way of communicating.”

From the late 1960s to the early 1980s, McCullin photographed people living on the streets in an area at the edge of London’s financial centre. He also turned his lens on communities living in the North of England, who had been neglected by policies of de-industrialisation. In one of those pictures, a woman pushes a pram across what looks like a post-apocalyptic wasteland; in another, a man pushes a pram carrying an older boy – a son who had lost his leg in a scrapyard accident. 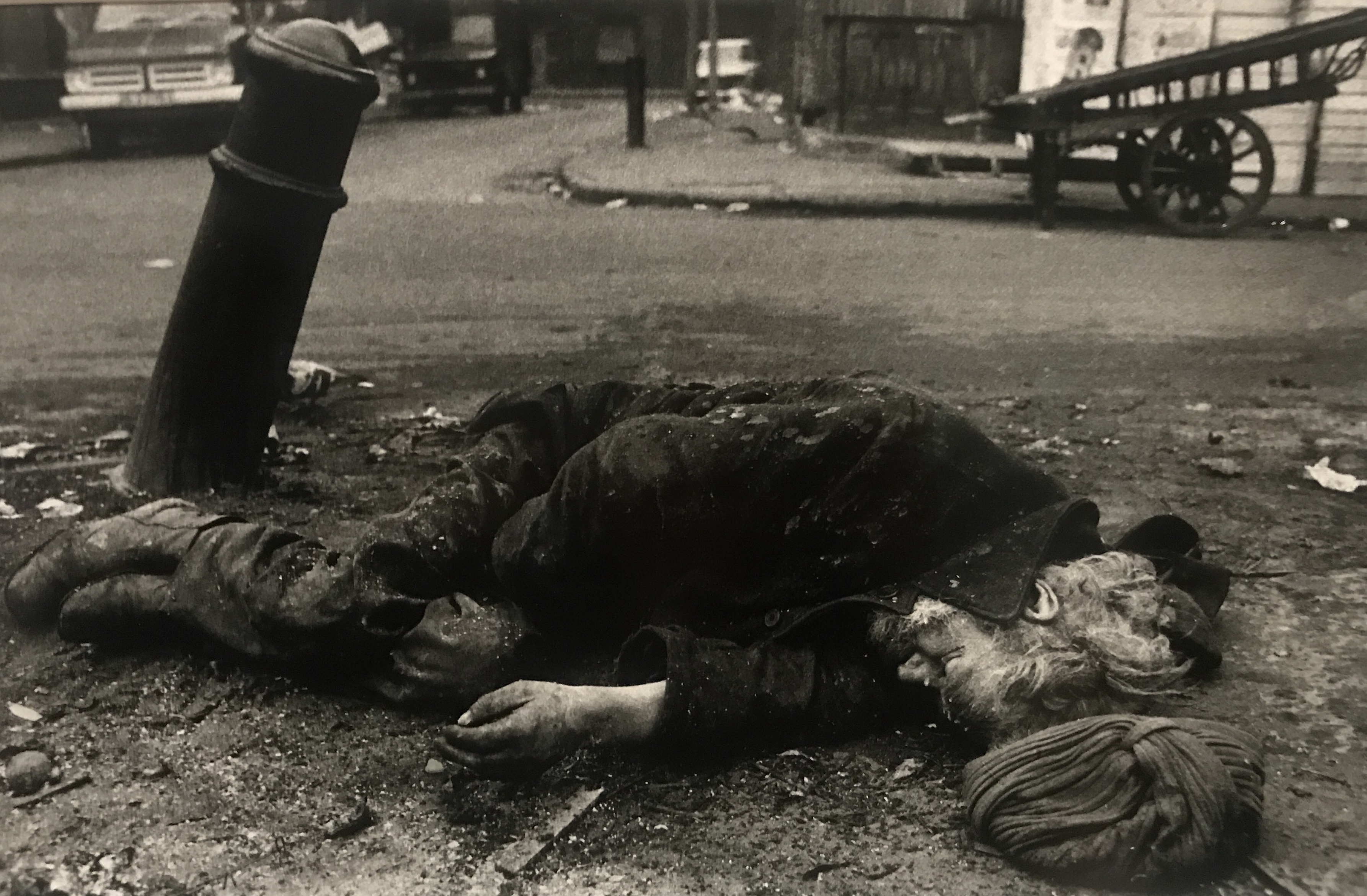 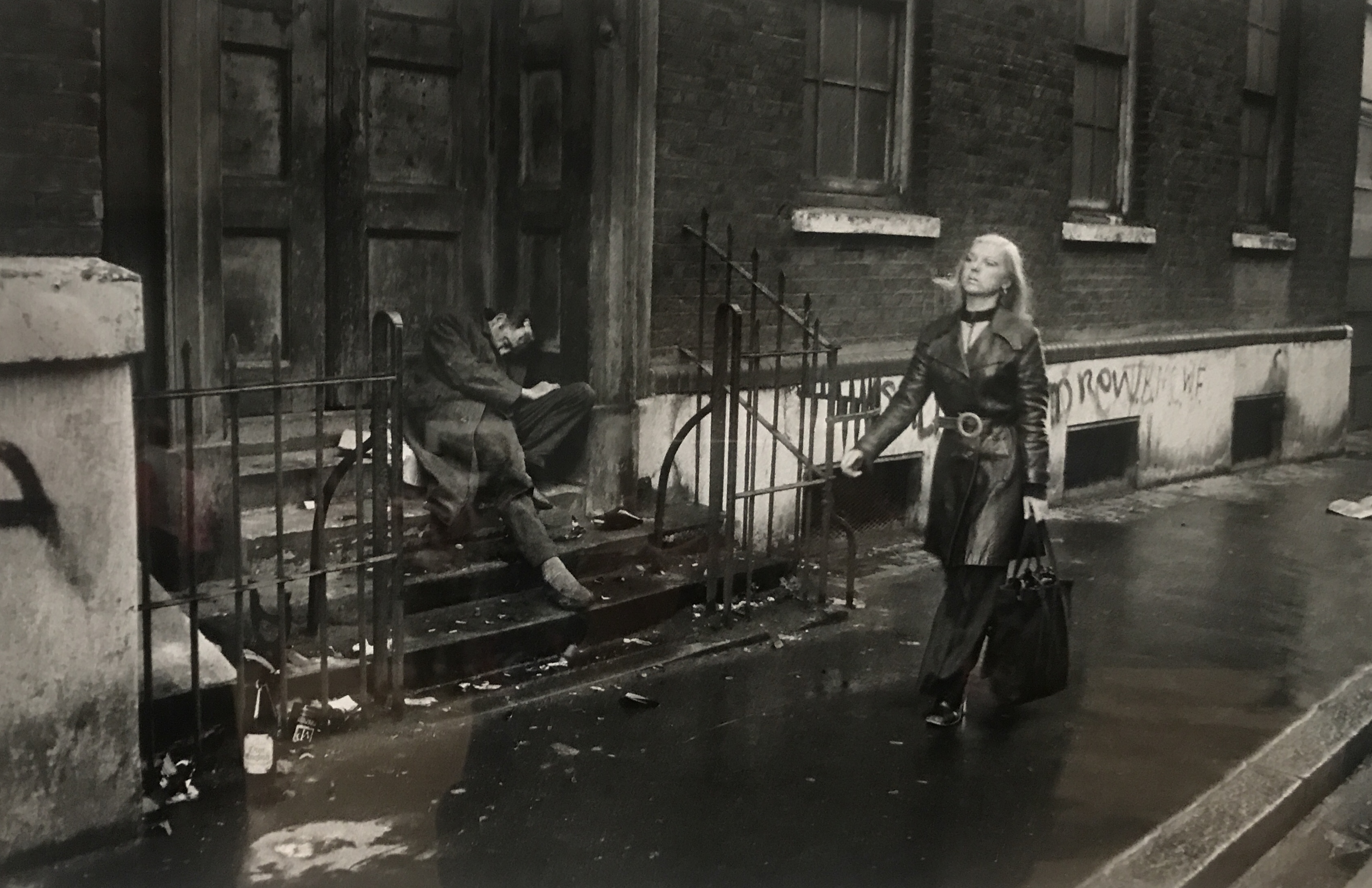 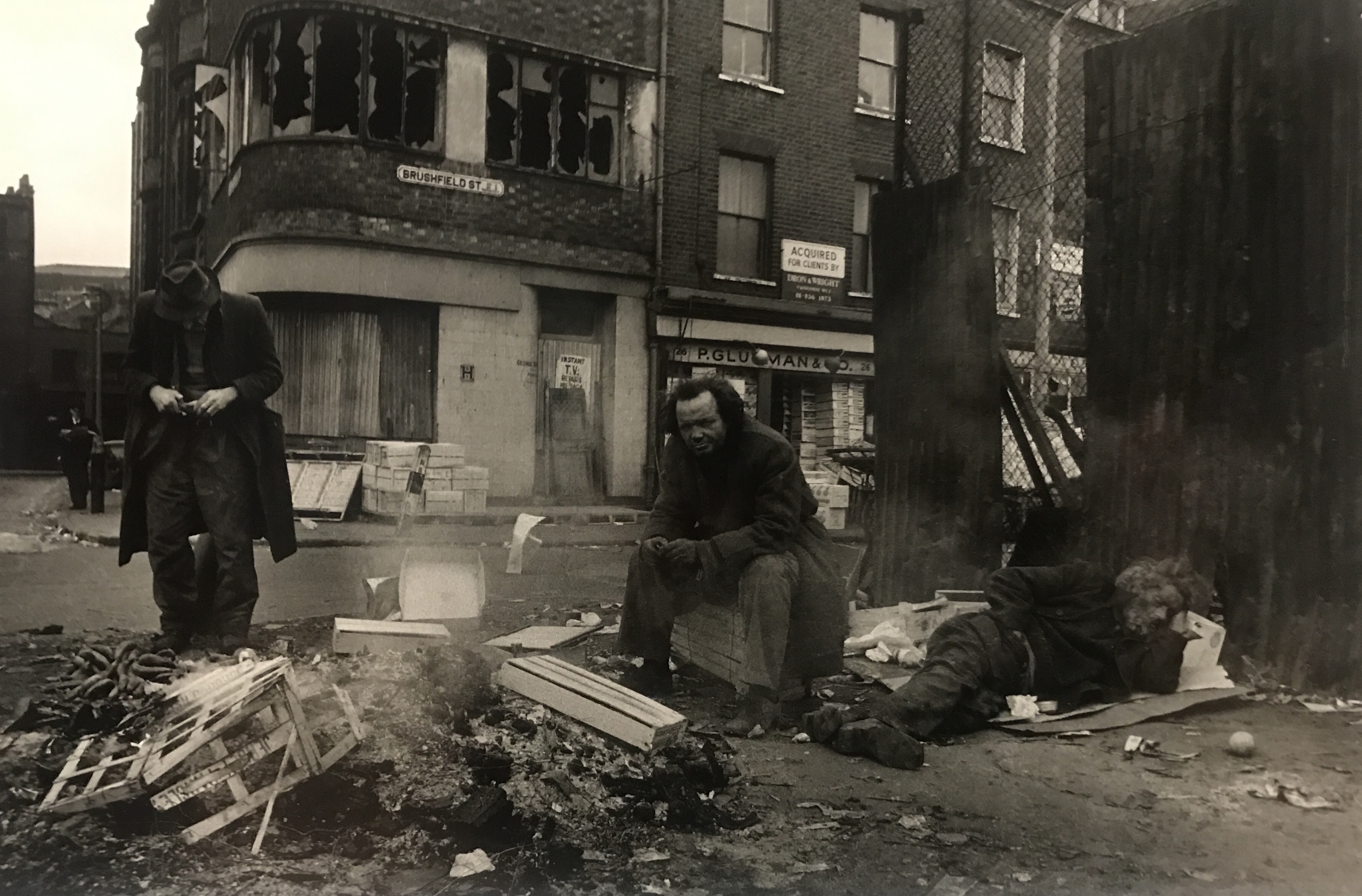 McCullin chose to get close to his subjects in more ways than distance – empathy shines through, whether it’s with mourners, soldiers or the socially marginalised. He was described as “a conscience with a camera” by Harold Evans, his editor at The Sunday Times. And he identified deeply with those he photographed. His father died of a chronic illness when McCullin was 14, and he grew up in a poor family, in an area of London that had been bombed heavily in World War Two. He has said that he empathises with many of his subjects: “I know the feeling of the people I photograph. It’s not a case of ‘There but for the grace of God go I’; it’s a case of ‘I’ve been there’.”

One of the earliest photos in the Tate show was taken in Finsbury Park, his childhood neighbourhood. “I started out in photography accidentally. A policeman came to a stop at the end of my street and a guy knifed him. That’s how I became a photographer. I photographed the gangs that I went to school with. I didn’t choose photography, it seemed to choose me, but I’ve been loyal by risking my life for 50 years.” 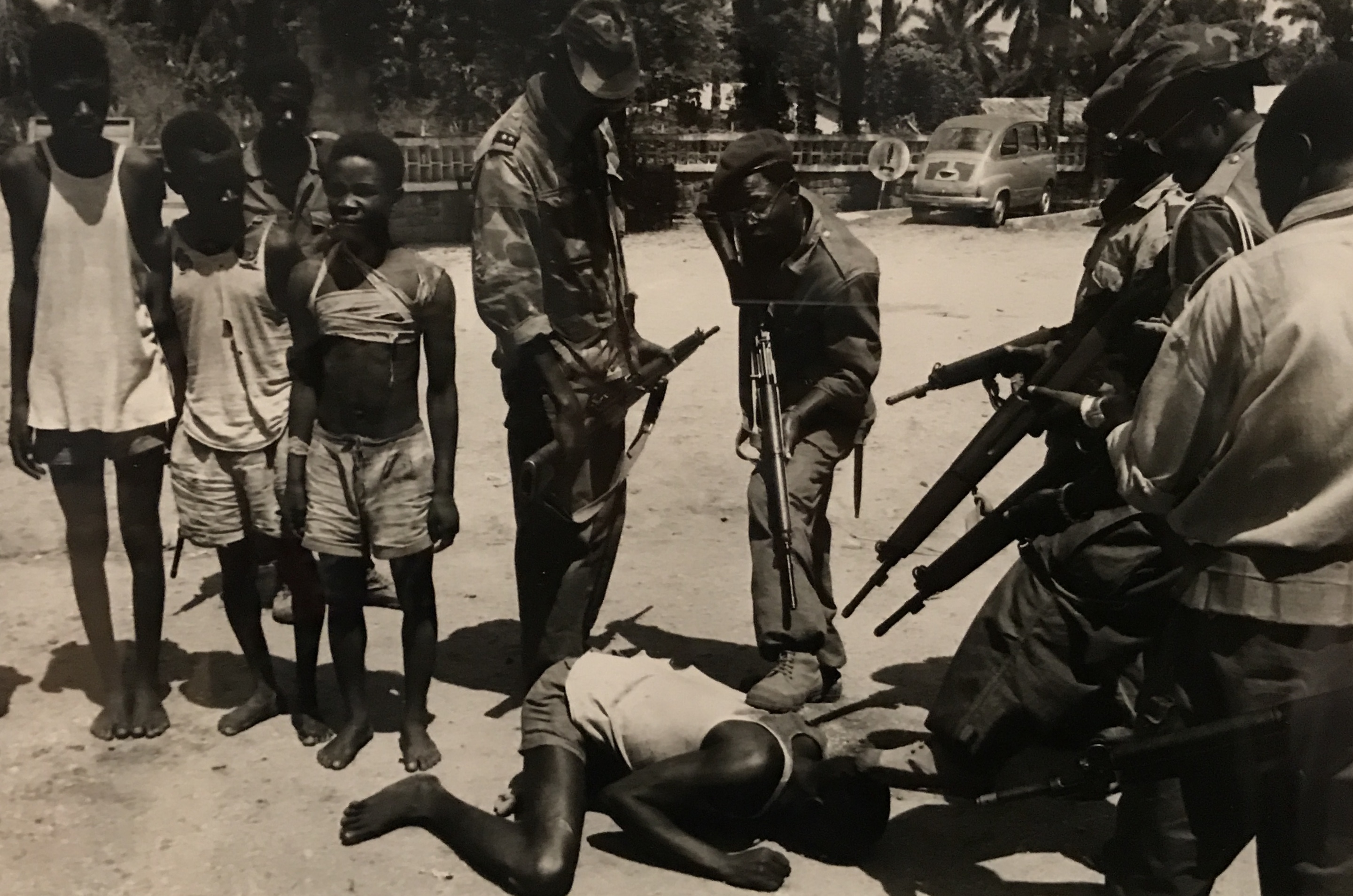 Tate Britain is open until 22.00 on the first Friday of each month for Late at Tate Britain